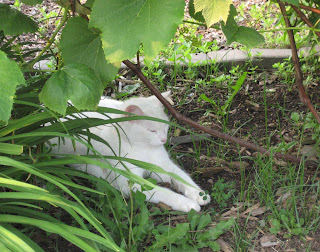 There were just enough posts in my feed reader this morning with the acronym LAPCPADPOUB to make me curious enough to find out what it meant, even though I’ve heard that curiosity killed the cat.

But I took my chances.

Like a cat who catches a whiff of catmint and won’t be satisfied until he founds the actual plant, I followed a trail of links to trace this acronym back to Happy Mouffetard of The Inelegant Gardener blog from across the big pond over in England.

LACPADPOUB stands for ‘'Lets all post cat photos and dire poetry on our blogs’, and today, October 12th, is the day they chose for this great blogging event.

This seemed right up my alley since I like acronyms, having listed many of the more commonly used ones on my blog the other day.

But I did have to embrace and overcome three obstacles do this post.

3) I might risk offending cat lovers or embarrassing my family by writing about the cats in my neighborhood, none of which comes running up to me to be petted, but all of which seem to find my garden a nice place to prowl around at night and leave deposits for me even though none of them should be outside roaming around because we have a city ordinance that says they shouldn’t be allowed to roam freely, but that doesn’t seem to stop them or their owners.

But obstacles are put in our way to be overcome! Finally, I have an excuse to post a cat picture and write bad poetry. It’s a two for one.

The picture above is of the neighbor’s cat.

I’ve caught him in my garden more than once, and I’ve chased him away, more than once. I’ve, oops, accidentally watered a shrub he was laying under, only to have him come running out like he was shot from a cannon. Yes, honest, the first time that happened, I didn’t know he was under that shrub.

Really, everyone who loves cats, I am doing this cat a big, potentially life-saving favor when I chase him out of my garden and back toward his own yard.

You see, his owners had him de-clawed, all four paws, so he can not defend himself if/when he runs into trouble. And he does run into trouble in the wilds of my neighborhood. In fact, the owners told me that earlier this summer he got in a big fight with something, and they had to take him to the vet to get stitched up.

I haven’t seen the cat in a while, which hopefully means his owners have finally figured out that a de-clawed cat is a house cat, not a yard cat, and definitely not a cat that should be roaming about the neighborhood.

Now, to complete this cat meme, here’s the poem to go with the picture...

There once was a cat without claws,
Who came to my garden to pause,
I chased him away,
But he came back the next day,
Oh, that made me mad when he thought my garden was his litter box, so mad that I can’t even figure out how to finish this limerick.

And that concludes my contribution to LAPCPADPOUB.

(Don’t forget to leave a comment on yesterday’s post before 9:00 PM EST today, October 12th, to enter into the drawing to win a free pair of garden shoes)
Blogging