November 25, 2008
Some gardeners freely admit that they don’t grow indoor plants. They might occasionally buy a blooming indoor plant and take it home to enjoy for a few days, but once the bloom is gone, they toss the plant out. It’s a brief relationship at best.

But for some of us, growing indoor plants is a long term relationship. We have plants indoors that have been growing with us for 10 years, 20 years or longer!

Here are five indoor plants that I’ve had for at least 15 years. 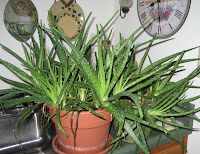 Aloe vera. One year at a family reunion, an aunt brought starts of an Aloe plant that had belonged to my grandmother. “Would any one like one?” was all I heard, and I took one home.

It soon became several pots of Aloe, so I’ve shared starts with siblings, nieces, nephews, friends, anyone who wanted one. Right now, I’m down to one pot of this Aloe plant as it recovers from a nasty mealybug infestation. But soon enough, I’ll have more to share. 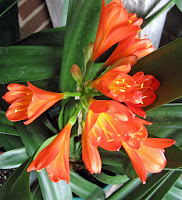 Clivia miniata. I talked my mom into getting this plant for me one year for Christmas, about 20 years ago. She ordered it by mail and kept it alive for me until Christmas day. (She's secretly proud of that, not being a gardener.)

I now have two divisions from that original plant, growing in the “quarantine room”, also known as the den, as they, too, recover from the mealybugs that invaded my indoor garden. 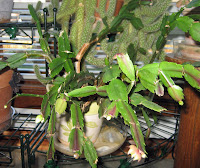 Christmas cactus, Schlumbergera sp. Who knows when I got this particular plant? I would guess it has been growing and blooming in my house for at least 15 years.

It’s getting a bit “thick stemmed”, so I took some cuttings from it a few weeks ago. If the mother plant dies, I’ll still have its white blooms to enjoy for many seasons to come. 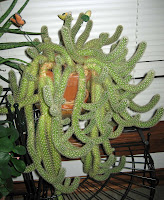 Cactus. A friend gave me a start of this cactus with no name about 15 years ago. It’s almost a permanent fixture in the sunroom, growing through and around the wire shelf it sits on.

It’s not a plant I want to pick up and move around anyway, with those menacing pricklies. Occasionally a branch will drop off, and I’ll carefully stick it in some potting soil and give it away once it has rooted.

The Night Blooming Cereus. Need I say more about this one? This is Epiphyllum oxypetalum. I inherited it in 1987 when my Dad passed away. It was much smaller then, but I’ve let it grow and encouraged it along, and eventually repotted it in a larger container.

Now it “owns” the corner of the sunroom where it sits, too large to move outdoors in the summer where it might actually be happier and produce more blooms. I usually get one bloom a year, sometimes two, and that’s enough excitement for me. I’ve also got my aunt’s night bloomer and four starts of new plants as back up in case something should happen to this one.

There are a few other plants that I’m also having or starting long term relationships with. Some were acquired in the last year or so, others came into my life many years ago. They include:

What makes these good plants for a long term relationship?

Most are easy to care for, asking for very little other than some light, water, and a little bit of fertilizer now and then. They are also easy to propagate. If the original plant starts to decline, it’s easy to start new plants from divisions or cuttings. This also makes them easy to share!

Do you have any long term relationships with indoor plants?
indoor gardening