First Snow at May Dreams Gardens 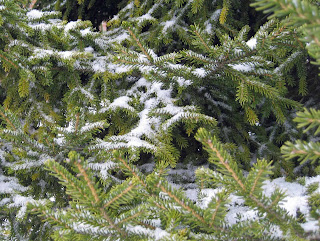 At first, the snow came down in soft, slow flurries, seeming to be in no particular hurry as each snow flake drifted down to land gently somewhere on the garden.

(I know it makes no sense for "flurries" to be slow, but they were slow.)

Then as the winds picked up, the snow fell quickly, snowflakes clumped together, as though it was terribly important to cover the bleakness of the late fall garden with a fresh coat of white snow as fast as possible.

The forecast called for “a dusting to an inch of accumulation”. I didn’t measure it, but I would guess this first snowfall on my garden on Saturday, December 6th was close to inch.

The day after the snow, I took the opportunity to see who else has been in my garden.

I found some bird tracks. 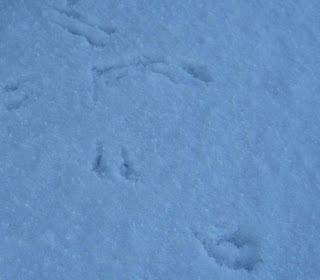 But you know I was looking for rabbit tracks, which I didn’t find. Ha! Where are they? I’ll find them eventually. This isn’t the last snowfall of the season, and they can’t hide forever. Eventually they have to venture out to find something to eat.

(By the way, snow isn't blue like that. You know that. I know that. I took that picture in the shade and it just came out blue.)

I’ve captured the snowfall in two videos for your viewing pleasure.

This first video is of the snow falling. Please excuse that humming noise, I don’t know what that was, perhaps it was an overzealous neighbor using a snow blower for this little pittance of snow. Snow makes no noise as it falls.

This second video is of the raised bed vegetable garden this bright, sunny morning after the snow. You can hear the crunch of my footsteps through the frozen snow.

When you walk through fresh fallen snow, there is no sound. But the next day, it's frozen up a bit so it crunches underfoot.

All of this snow should be gone by Tuesday, when the high temperature should be close to 50 F. But soon enough, it will snow again, and we'll repeat this cycle of snow and thaw, snow and thaw, until the final spring thaw.

This post is part of the Garden Bloggers’ First Snowfall Project hosted by Nancy Bond. Thank you, Nancy, for this opportunity to share the first snowfall at May Dreams Gardens
weather winter