January 10th and winter continues. We are still about 9 weeks away from being able to sow any seeds in the garden.

But this has not kept me from getting six packets of seeds from Botancial Interests Seeds to try in my garden this year.

The first thing I noticed about their seed packets, in addition to the beautiful paintings of the flowers and vegetables on each of them, is the amount of information they have managed to get on one packet of seeds.

These have got to be the most informative seed packets I’ve ever seen, and yes, I have seen a lot of seed packets in my gardening days.

In a comment on my recent post about Temporary Botanical Names, MSS from Zanthan Gardens asked why we don’t use botanical names for vegetables. My short answer is probably because most people don’t know them. But with seeds from Botanical Interests, we can learn them!

Using this wonderful botanical name information on the seed packets, let me just say that I’m excited about the Lactuca sativa seeds that I’ll be sowing in early spring, the Lycopersicon lycopersicum seeds that will hopefully be the beginning of a new adventure in tomato growing and the Zea mays var rugosa seeds that may give me bragging rights for the earliest sweet corn.

(For what it's worth, I don't generally think it is a good idea to use botanical names when talking or writing about common vegetables, I just think it's fun to know what those names are.)

They also included on the outside of the seed packet other information you would hope would be there, including common name and variety, weight, price, whether or not the seeds are organic, description of the variety, when to sow outside (or inside or both), how to sow, days to emerge, depth to sow, spacing within a row, and spacing of rows.

They seem to have thought of everything in the design of these packets because there is also the unexpected feature of a section of the packet that you can cut out to make a label.

And did I mention they also put the name of the artist for the botanical illustration on the packet?

Even though it’s going to be awhile before I can sow seeds outside, I opened up the Lactuca sativa seed packet to take a look at the additional information inside. 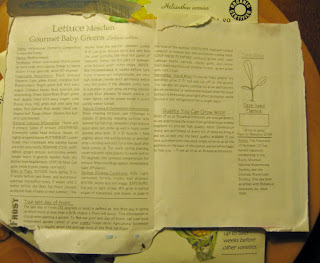 Wow… they've packed the inside with several paragraphs of good information and stuff that is helpful and just plain fun to know. Stuff like plant family, where native, hardiness info, more descriptions and general information about the plant, special sowing and germination instructions, optimal growing conditions, and when and how to harvest (for vegetables).

There is also a drawing of what the seedling looks like and a place to record the date you sowed the seeds, that ends up on the back of the cut out label, along with biographical information about the artist who painted the illustration on the front of the packet.

I’ve gotten seed packets before that literally included a one line instruction like “sow outside 3 – 4 weeks before last frost”. Because I’ve sown seeds since I was a kid, and most of the time I know how to sow them, I've gotten by on this little bit of information.

But someone new to gardening or seed sowing might need or like a bit more information. They’ll find all the information they’d ever need, and then some, on packets of Botanical Interest Seeds.

Oh, and by the way, Lactuca sativa is Lettuce. The packet I got from Botanical Interests is Mesclun, Gourmet Baby Greens. According to the packet it contains 18% Black Seeded Simpson, 16% Buttercrunch, 17% Green Salad Bowl, 17% Lola Rossa, 17% Red Oakleaf, and 17% Rough d’Haver.

I’m going to sow some of this lettuce mix in a container near the back door just as soon as it starts to warm up around here, or March 17th, whichever comes first.

Anonymous said…
Excellent post on seed packets. Yes, Botanical Interests is a great company for seeds. I buy them in Oklahoma City and use many of their veggies and unusual flowers.

growingagardenindavis said…
I love their packages too..I buy their seeds at the local Ace Hardware. I just picked up a package of Chamomile (Matricaria recutita) Friday!
Sat Jan 10, 10:52:00 PM 2009

EAL said…
Wow! I didn't even notice all that stuff. I gave most of mine to my friend the seed king, so they could be tested competently.

Unknown said…
It's really nice to see seed packages that DO have a good amount of information; most of them, as you know, have a scanty set of directions, and while that's okay for skilled gardeners, for beginners it's got to be overwhelming for beginners who want a few peas and beans and lettuce. I'll have to see if they're available around here.
Sat Jan 10, 11:51:00 PM 2009

Robin's Nesting Place said…
It'll soon be time to start planting seeds for the indoor growing system. I'll have to see if my local Ace carries these seeds.
Sun Jan 11, 12:04:00 AM 2009

Katie said…
Thanks for the review. I have some seed packets from Botanical Interests as well and found them to be highly informative without being off-putting or highly-technical for newer gardeners.

I am happy to have found another company to purchase seeds from! I like how they have really interesting varieties also.
Sun Jan 11, 12:38:00 AM 2009

Kylee Baumle said…
They have a couple of things I'd like to order and of course I'll find a few more by the time I get around to actually placing the order. I love that they have all this info on their packets!
We've grown Mesclun mix the last two summers and love it! I did find that it's not a great idea to pick it until you're ready to eat it. It doesn't store well for me - too tender!
Sun Jan 11, 01:42:00 AM 2009

Lisa at Greenbow said…
Gosh, I would want to be opening all of those seed packets just so I could read all the information about them.

I have often wondered where seeds/plants are native. I haven't really thought about where lettuce is a native plant. Where? This makes even lettuce seem exotic. Now I am wondering if out there somewhwere lettuce is growing like dandelions grow here. ?
Sun Jan 11, 07:40:00 AM 2009

Anonymous said…
Thanks Carol. I have not tried this company before but will look into it just for all the info on the packet. You cannot have too much info about the conditions needed for optimum germination and especially what the seedlings look like. Not so important indoors when you have a sterile mix and no other seeds hanging about, but crucial outdoors with all the weed seeds living in the soil. I find the the important bits of information to be the temperature range for germination and whether or not light is needed to germinate. I am starting earlier this year indoors, trying to get larger plants when it comes time to set them into the ground, we'll see how it goes. :-)
Frances
Sun Jan 11, 08:29:00 AM 2009

Anonymous said…
I have yet to receive, or even order, seeds yet but now that I know I am only nine weeks away from planting...gosh, I'd better get moving. Thanks for the reminder and I will pay more attention to the package from now on.
Sun Jan 11, 08:31:00 AM 2009

Unknown said…
We carried these seeds in the past. When we moved to our new site we stopped. I think I'll check into them again.

Congratulations on the article in the Austin Statesman about GBBD. You are one of the TOP garden bloggers out there, and its nice that main stream media has taken notice.
Sun Jan 11, 09:55:00 AM 2009

Daphne Gould said…
I love that they put the botanical names on the packets. I wish all seed packets and seed catalogs for that matter had them. Yes I am one of the few that said I liked common names for plants over botanical ones, but the information is useful. If my squash is a Cucurbita pepo, the odds are the vine borers will kill it. If it is a Cucurbita moschata it will probably live.
Sun Jan 11, 10:27:00 AM 2009

Mr. McGregor's Daughter said…
All seed packets should have a picture of what the seedlings look like. Then those of us who favor direct sowing won't pull them & nuture the weeds instead! I've always admired the artwork on Botanical Interests packets. They'd make great posters.
Sun Jan 11, 01:01:00 PM 2009

Cindy, MCOK said…
We're very fortunate here in the greater Houston area that several nurseries carry Botanical Interests' seeds. Most of the seeds I've purchased are for things I've grown before so I haven't really looked at the information inside. I'll have to do that next time!
Sun Jan 11, 01:15:00 PM 2009

Gail said…
We can find these wonderful seeds locally. I discovered the info on the inside after I ripped the package open with seeds I was already familiar with! Another company I can recommend is Seeds Of Change. I get my Zinnias from them..they have a mix I really like. Gail
Sun Jan 11, 02:15:00 PM 2009

Rose said…
Carol, This is a company I am definitely going to have to check out! Apparently I am one of the few who hasn't heard of Botanical Interests before. I like the fact that they include a picture of a seedling. When I plant something I've never tried before, I'd like to be able to distinguish it from a weed:)
Sun Jan 11, 03:18:00 PM 2009

Diana said…
CArol - how fascinating. I had no idea there was more info on the inside of the packet! We can readily get Botanical Interest seeds here, and I have a lot of them in my bin of "old" seeds. I'll have to cut some open and see what's inside. In fact, I think Kallie planted some last weekend. Now my big question is, how long do those seeds keep? I'm experimenting - trying to use some of my packets that are years old. Good luck with that lettuce!
Sun Jan 11, 10:20:00 PM 2009

Anonymous said…
Most of my seeds are from Botanical Interests because that's the brand they sell at Austin's other upscale supermarket (ie, not Whole Foods Market but Central Market--where we had breakfast tacos once.)

I find it difficult to resist impulse seed purchases when standing in line. Also, I rarely get my seed orders mailed in time to plant in Austin. So I end up buying my seeds in person.

Botanical Interests has a great selection and I too enjoy reading their seed packets. Unfortunately I rarely read the information inside until after I've sown the seed.
Mon Jan 12, 06:19:00 PM 2009

Anonymous said…
Hi Carol,
I love Botanical Interest Seeds! Not only do they cram their packet with info - the germination is excellent! Check out their website: http://www.botanicalinterests.com/store/shop.php
They have a wonderful, chatty and enthusiastic newsletter and great fact sheets about each of their varieties - and the type is bigger on screen than inside those seedpackets!!!
Lorene
Thu Jan 15, 12:10:00 PM 2009