The Secret of Early Blooming Crocuses 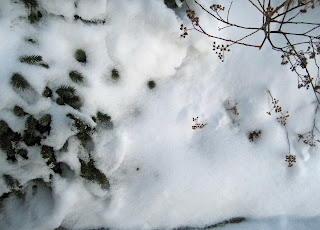 Ladies and gentleman, we are gathered around the spot where an actual crocus once bloomed on January 27th back in 2002 and again in 2007.

And because a flower once bloomed that early on this spot not once, but twice, it is the focal point for my annual crocus watch, which this year began on the anniversary of that early bloom.

The day after I first started looking for a crocus bloom, we got a foot of snow, so I suspended daily checks for signs of a bloom and told the news media to go home. (I made up that part about the news media. They weren’t really here, but they should have been. After all, outdoor blooms in January in Indiana are rare.)

Over the weekend, it warmed up to the low 40’s, melting about half the snow, so the watch was temporarily back on, until I realized that half of a foot of snow still means that there are six inches of snow left to melt.

Then the temperatures dropped again and we got a “weatherman’s one to two inches of snow” Tuesday morning which turned out to be closer to four inches of snow for us regular people.

Currently it is 1° F degree outside, but the same weatherman who predicted the last snowfall now tells us that the temperatures are supposed to go back up over the next several days, peaking at 50° F by Saturday. Believing this, because I always believe the weatherman, I remain hopeful that once again, a crocus will bloom on this spot in the near future.

Truth be told, because the truth is important on a blog, I think my chances of having a crocus blooming by the 15th are 100% because there were actually some crocuses blooming before February 15th in 2007. It just so happened that when bloom day came around, they were buried under the snow. My garden journal tells me so!

But there is a 100% chance of my actually starting a third year of bloom day posts. We welcome everyone to join in whether it is your first bloom day or your 25th bloom day!

Now for those of you reading this blog for some actual gardening information that you can use in your own garden, here’s my secret to getting crocuses to bloom as early in January in some years.

Plant them in a micro-climate.

The early blooming of a crocus in this particular spot is probably because the radiant heat that comes off the bricks of the porch a foot away helps to warm this spot up earlier than other more exposed areas of the landscape. Thus, the crocus “thinks” it is later and warmer than it really is and blooms earlier than crocuses elsewhere in the garden.

I didn’t think about the microclimate when I planted the crocus corms in this spot, but once I realized what was going on, I took full credit for this careful placement.

I take credit for everything good that happens in my garden…

… and blame the rabbits for everything else!
bulbs