A Dinner Was Held At The Home Of... 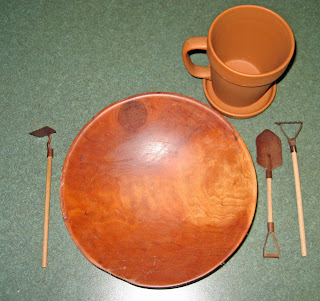 Remember when small town newspapers reported on everything that went on, including who might have gotten together to eat and play cards, who had out of town visitors, and who had just recently returned from a vacation?

Those sometimes fascinating and generally mundane items might take up two or three columns of the ‘society page’, depending on how big the town was and how much space the editor had to fill.

I suspect, too, that most of that information was already known by the neighbors before it made it into the paper, since not much goes on in a small town without every one knowing about it.

Well, if my garden was in a place with a small town newspaper, the following might appear on the society page this week because I’ve accepted the invitation of VP at Veg Plotting to host a dinner party with whomever I’d like to invite.

“Recently a dinner was held at the home of Carol, May Dreams Gardens, with several out of town guests including Elizabeth Lawrence, Charles Dudley Warner, James Underwood Crockett, W. Atlee Burpee, and Brother Cadfael of Shrewsbury Abbey.”

But such a small item wouldn’t even begin to tell the story of this dinner party!

Elizabeth Lawrence was the first to arrive and I was happy about that because I wanted her to tour the garden before dinner without being interrupted by what was sure to be some loud, boisterous discussions and arguments amongst the other guests. In particular, I wanted her input on the design of my garden and her help in identifying a few plants.

While I had the chance, I also asked her how she managed to keep up her correspondence with so many other gardeners from all areas of the country and all walks of life. And in private, I gushed a bit over her writings and thanked her profusely for her quote that was a big inspiration for Garden Bloggers’ Bloom Day.

Shortly thereafter, Charles Dudley Warner arrived and we proceeded to commiserate on ‘pusley’ and how hoeing this particular weed is the last thing you want to do. We agreed it must be pulled and destroyed!

I also showed him my hoe collection, and he lamented that in this day an age, hoeing is not as popular as it once was. He surmised that a bit more time in a garden with a hoe would be good for everyone. In fact, his exact words were, “One gets strength out of the ground as often as one really touches it with a hoe.”

We would have discussed this in more detail, but just then James Underwood Crockett arrived. You all remember him from the original Victory Garden shows on PBS, don’t you? He spent quite a bit of time in my vegetable garden and gave me some tips on what I could do to make it so much better than it has been.

He also reminded me that I have many volumes of the Time-Life Encyclopedia of Gardening that he wrote and though these books are over thirty years old, they still contain a lot of good information.

We were interrupted a few times by Charles stating emphatically that most of the problems of the garden and society in general could be solved by everyone spending more time hoeing and tending a garden. We all agreed!

I was delighted at the positive response that everyone had to my fourth guest, W. Atlee Burpee. After he arrived, we all talked about seeds for quite some time and determined that sometimes the old varieties of flowers and vegetables are best but we shouldn’t just ignore some of the new hybrids, because they are good, too.

My final guest, Brother Cadfael was just a little bit late in arriving, having stopped along the way to check on a few clues that might help him solve his latest murder mystery, which ironically involved a rabbit in the garden.

I invited Brother Cadfael, an herbalist of the highest order and greatest reputation, because I’ve always wanted to learn more about herbs and how to use them, and I wanted his input on where to put an herb garden and what to plant in it.

After a fine dinner, Brother Cadfael entertained us all with stories from his life before he joined the brothers at the abbey, along with fascinating, but slightly gruesome, details of some of the recent murder mysteries he had solved.

All too soon, the hour grew late and all my guests had to leave. After they left, I closed the door softly behind them, resolving to have more dinner parties like this one.

I hope they had as good a time as I did and learned as much as I did.

I encourage everyone to have such dinners now and again, and especially today. Be sure and let VP know if you do!
books

beckie said…
Carol, I remember those newspapers very well. And yoy are right that we pretty much knew the 'news' already, but it was still a thrill to see names in print. In our small town it didn't take much to amuse us. :}

Your guest list is very impressive. I know I certainly would have enjoyed being there. I will have to think about who I'd invite. A fun exercise in virtual winter gardening!
Sat Feb 07, 12:44:00 AM 2009

VP said…
Carol - as usual you've put together a thoughtful and delightful post. I thought Elizabeth Lawrence and Charles Dudley Warner might put in an appearance and they seem to have been the most delightful of guests.

Thanks for including James Underwood Crockett as I'm researching Victory Gardens at the moment and I'm sure Brother Cadfael came up with some good advice for your own rabbit problems as well as his stories.

Lisa at Greenbow said…
Carol what a delightful and insightful dinner party. You forgot to add ..."a good time was had by all." This was always added to our small town paper's report about dinner parties.
Sat Feb 07, 08:17:00 AM 2009

Anonymous said…
I'm glad you included Mr. Burpee. Although heirloom and open pollinated seeds are wonderful, I think we sometimes forget the reasons our farming forebears spent so much time trying to develop "improved" varieties...if you've ever lost a tomato to wilt, that's why.

sweetbay said…
Ha! That is such a cute table setting.

Anna said…
It sounds as is you are going to be enjoying some excellent company at your dinner party. I do like your choice of Brother Cadfael from the pages of a book. Shrewsbury is only thirty miles or so down the road to me. I might have chosen one or two different guests if I had thought along those lines but too late now. The deed is done :)
Sat Feb 07, 11:56:00 AM 2009

Anonymous said…
I know of Brother Cadfael, having read about many of his adventures. He should keep the conversation going!
I look forward to seeing the newspaper report and (hopefully) the accompanying photograph.
Sat Feb 07, 12:23:00 PM 2009

Ann D. Travers said…
Jim Crockett! Good for you. I still use his advice frequently. Got started on him via my father. And Brother Cadfael's familiar to me via my mother, an avid mystery reader. Great dinner party posting.
Sat Feb 07, 01:28:00 PM 2009

Anonymous said…
Sounds like a lovely party. I would like to meet all of those gardeners. Your place setting were very appropriate too. Good show.~~Dee
Sat Feb 07, 03:27:00 PM 2009

Hands up, I’m not familiar with any of your guests but through reading your comments I can see that Brother Cadfael seems popular. I’ll need to look him up. It sounds like you’ve had great mix and enjoyed everyone’s company, great stuff :-D
Sat Feb 07, 04:39:00 PM 2009

Jean Campbell said…
Before I got to your delightful guest list, my first thought was that small-town newspapers have been replaced by the blog.

I've deleted many feeds when I realized how shallow the content was.

Gardeners are the one exception; I rarely delete a garden blog.

Annie in Austin said…
The mini-tool and terra-cuppa tableware is hilarious and adorable at the same time, Carol! What a cool post this is.

I might like to keep it a smaller party: Brother Cadfael, Jim Crockett & Elizabeth Lawrence representing herbs, vegetables and ornamentals.

Burpee might be a little too high-power for comfort and you are much more fond of Warner than I am.

Kathy said…
The key to a good dinner party is selecting a varied but harmonious assortment of guests. I think your party would be a great success!
Sat Feb 07, 05:25:00 PM 2009

Anonymous said…
Frankly, Carol, I was worried when I saw you at the 12-step meeting at my place tonight...you seemed so stressed, and had binged on seeds again. But when I saw what had been up here with hosting the dinner for such luminaries, no wonder! I would have had Crockett and Lawrence as well, but also the irascible genius Christopher Lloyd.
Sat Feb 07, 08:16:00 PM 2009

Unknown said…
What do you mean, remember when? The rag-that-passes-for-a-community newspaper here in the Valley STILL reports on who visited whom...but your entry was far, far more entertaining to read.
Sat Feb 07, 10:50:00 PM 2009

joey said…
With so much going on this evening, afraid I might miss interesting tidbits, I popped over, delighted to peek in on you and your amazing guests. Though thoughtful conversation with much to still learn, I'm off to check in at home ... if interested, dessert in still on the table.
Sat Feb 07, 11:48:00 PM 2009

Carol Michel said…
Thanks to all for joining in for my dinner. Consider yourselves invited as well, though we'll have to move outside and set up some long tables... take down the doors and put them across some sawhorses like the farmers used to do when a big crew came for the harvest. It would be a fun and great time!

I helped research a book on the history of Boise. I loved going through the last 120 years of newspapers and reading about the parties: the guest list, entertainment, table decorations, fresh apple blossoms on the mantle piece, etc.

I especially love your table setting.

Rose said…
Carol, we used to have a local paper that had just such "society" articles; you've brought back some memories here. With a guest list like yours, I think your dinner party might make it to the front page, though!

I knew you would invite Elizabeth Lawrence, but wasn't sure who else might attend. Thanks for inviting Brother Cadfael; I didn't see this post last winter about his books (my pre-blogging days), and now I think I'll check them out--I love a good murder mystery.
Sun Feb 08, 10:58:00 AM 2009

Anonymous said…
You're garden mission statement is up at Gardening With Confidence - check it out http://tinyurl.com/cu9kdx and Thanks! Helen
Sun Feb 08, 05:55:00 PM 2009

Anonymous said…
You're garden mission statement is up at Gardening With Confidence - check it out http://tinyurl.com/cu9kdx and Thanks! Helen
Sun Feb 08, 05:58:00 PM 2009

healingmagichands said…
Remember those newspapers? We HAVE one. Every Wednesday we get four pages of "community news" which consist of tidbits like Joyce's daughter came down from Kansas City and she went to lunch at Red Lobster, then on Friday we get another four pages of Church bulletins which tell us all about the sermon last Sunday. None of it interesting, none of it germane, all of it a waste of paper.
Mon Feb 09, 10:43:00 AM 2009