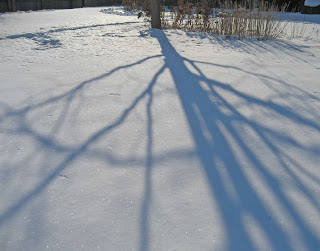 It seems we gardeners share more than a passing interest in the meteorologists’ holiday, Groundhog Day. We all want spring to arrive sooner rather than later, and if we can predict when it will arrive, so much the better.

Under normal circumstances, the weathermen use sophisticated equipment to gather all kinds of data about barometric pressures, temperatures, wind directions, rainfall, and who knows what to try to accurately predict the weather.

Their accuracy seems to vary, of course, and rarely do their forecasts and actual weather outcomes please everyone, or anyone.

But we really want the weathermen to be right when it comes to predicting when spring will arrive. They want to be right, too, I assume, and so dispense with all the fancy stuff and instead use a large groundhog, a type of rodent known as a marmot, to help with that prediction.

We all learned in school how this works. If the groundhog sees its shadow on February 2nd, it presumably will get scared and go back into hiding for six weeks, until spring. If it doesn’t see its shadow, it will stay out and that means an early spring.

As I noted last year on Groundhog Day, here in my zone 5 garden, a groundhog in Pennsylvania seeing its shadow while surrounded by legions of weatherman dressed in tuxes and top hats seems to be a poor predictor of when spring will arrive.

I can suggest other animals that are much better predictors of when spring will arrive in my garden.

If the winter warren dwellers, also known as rabbits, come out from hiding and eat the emerging henbit that seems to sprout all over the garden at the first sign of warmth, I
predict spring will arrive around mid-March, at which time I’ll plant peas.

If the birds eat all the seed out of the feeder in just a few days time, it means that spring will arrive around mid-March, at which time I’ll plant peas.

If a dead rodent of some kind, possibly a vole, maybe a mole, shows up at the top of the drive after I’ve just used a snow blower to remove a foot of snow from it, it means the rodent unfortunately didn’t make it until spring. That’s a shame because it only had about six more weeks to wait until spring arrives in mid-March, at which time I’ll plant peas.

As you can see, I am pretty confident that spring will arrive in my garden in mid-March, at which time I'll plant peas.

And I feel certain that before then, I’ll see rabbits eating henbit and have to fill the bird feeders every few days to feed the birds. I also did, indeed, find a dead rodent of some kind on my driveway after clearing off the snow the other day.

For those interested, my apologies for not posting a picture of the dead rodent. I do have a picture of it, but I also have a long standing policy of not posting pictures of dead rodents on my blog. But, yes, if enough people request the picture, I can ignore that policy and add it at a later time.

And now let me just say…

Happy Groundhog Day to all. May every day bring you the happiness of an early spring day in your garden, at which time you'll plant peas.
holidays humor spring