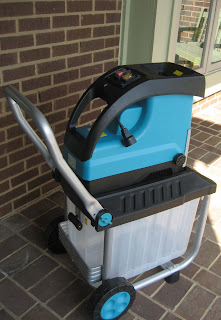 This spring I’m beginning chapter 3 in my novelette, “Chipper Shredders I Have Known”.

Chapter 1, yet to be fully written, is about my first chipper shredder, a gas powered beast that was loud and heavy.

Chapter 2, which has appeared on my blog in the past is, about a lovely electric chipper shredder that I bought a few years ago. It was very liberating and very fun to use, and still is.

Now I’m beginning Chapter 3 with another electric wood chipper sent to me to review by the people who also sent me a compost tumbler to review last year. I love that compost tumbler, and as good as it works, even it would take a long time to compost sticks and large chunks of plant debris.

As gardeners, we all know this, and so presumably, at some time or other we covet, want, need, must have, some kind of chipper shredder.

So far, it’s gone pretty well with this new chipper. It arrived a few weeks ago, and I drug it in to the front hallway where it sat for a week or so in its box. No rush, it was still cold and wintry outside. (Yes, gardening tools and equipment, as long as they are clean and present no danger to anyone, are allowed inside my house.)

Last Sunday I sensed the weather was changing, since I’d seen the first crocus bloom the day before. It was time to put the chipper together.

I cut open the box, right there in the front hallway, and found another box, which I also cut away from the chipper. Doing that was easier than trying to lift the chipper out of the box.

Assembly was fairly straight forward. I removed the plastic hubcaps from the wheels and attached the wheels to the frame, along with two little plastic feet. The nice part was they provided two wrenches that were the right size for the bolts.

Next, I set the business part of the chipper, the motor part, upside down on the floor, set the frame on top of it and attached it with four screens. Then I turned the chipper right side up, put the collection bin back in place, raised the handled, and easily rolled it out to the front porch for a nice picture.

Now it’s a warm spring day, the Crocus and Iris are blooming, the buds are swelling, and the birds are chirping from every tree, hopefully finding good places for nest building.

Soon I’ll be going out to prune the grapevines, cut back some perennials, and gather up whatever I can find to chip and then… chapter 3b… I’ll start chipping. I’m kind of excited, as I usually am, when I have a new gardening tool to try out.

I’ll let you know how it goes in a few days.
reviews tools

Anonymous said…
That is one neat looking chipper. Who makes it?

Sheila said…
I too am enamored with chippers! I have two, one for each garden. They are the big, high powered ones that will take branches up to three inches! Who says size doesn't matter!
Sat Mar 07, 11:21:00 AM 2009

healingmagichands said…
We have a chipper shredder, it is big and it was expensive and it is horribly noisy. It is a 8 hp Troybilt. It does a wonderful job of chipping and shredding as long as it is not trying to digest something damp (like the corn stalks in your previous post about the electric chipper). It absolutely binds up and quits if you have the nerve to try to feed it something like iris tubers.

But for what it is, it is quite satisfactory, and we love it.

However, I will be very interested to see how you rate this shredder. Someone needs to make one that will deal with wet stuff (like broccoli plants when they are spent) when it comes right out of the garden. The choke point here is the big pile of Stuff that is waiting to be dry enough to shred without choking the machine.
Sat Mar 07, 12:44:00 PM 2009

Lisa at Greenbow said…
I hope your chipper shredder works as well as ours does. We have a much older model and we used to use it a lot. Now we take away large loads to the city stick pile. We haven't used our chipper in a long time. It is noisy even though it is electric.
Sat Mar 07, 04:27:00 PM 2009

JGH said…
Oh yes, I want/need/covet and am envious that you have one of your own. I've been looking on Craigslist and even thinking about renting one for a day. But after a couple of those rental days I could purchase this one. Hope this chipper chapter ends well for you!
Sat Mar 07, 08:16:00 PM 2009

Anonymous said…
That is one neat looking chipper! I really need to make one of these gadgets my next investment. Can't wait to see the next part of this review.
Sat Mar 07, 09:27:00 PM 2009

Kathy said…
If you don't have enough to test it with, I have a large pile that is willing to be a guinea pig. As the current owner of shredder #1 from the yet to be published book, you could do a side by side comparison. Just let me know when.
Kathy
Sat Mar 07, 09:44:00 PM 2009

Rock rose said…
This certainly looks like an interesting chipper, something I might be able to handle myself, so I'll look forward to hearing how well it works. We are chipperless at the moment. Two years ago my husband was complaining about the garage been full of things other than cars and talking about one of those plastic shed things and I said, well, I'd rather you sell the things than buy one of those. In a flash the shredder was on Craig's list and gone in a minute! It always was difficult to use and always getting clogged up. It made nice compost but was a horrible, filthy chore for D. I wonder if it will shred soft plant material.
Sun Mar 08, 07:47:00 AM 2009

Anonymous said…
I am with everyone else in wanting to hear how well this does. We have been toying with the idea of a chipper/shredder for years, so it will be interesting to see how this one turns out.

Entangled said…
I'll be interested to read how well this one works. I bought an electric chipper/shredder several years ago, but it was too underpowered to work well. It jammed all the time and, after one particularly bad jam, it died. Hope this one works!
Sun Mar 08, 10:58:00 AM 2009

Carol Michel said…
Everyone, thanks for your comments and questions. I'll try to answer all of them in a follow up review post in a day or so, and yes, there will be video of the chipper in action!

Pat said…
Another wanna-hear-more here! We have a little electric vacuum-shredder which is OK for leaves and small stuff, but it doesn't do a very good job on twigs and especially on oak leaves -- it seems to pass them through whole and undamaged. Since I live in a mostly oak forest, I need something better.
Mon Mar 09, 04:21:00 PM 2009