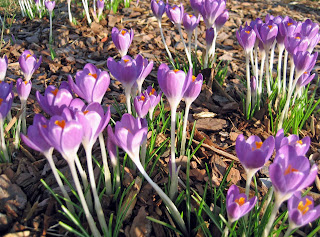 Short version of the review: I like this chipper quite a bit and now that I have it, if I didn’t have it, I’d miss it.

Long version of the review: This Saturday, it was a beautiful day in central Indiana, with a high temperature of 76 F, so I wasted no time in putting my newly assembled chipper to work.

The same company who sent me a compost tumbler to review last year, sent me this electric wood chipper a few weeks ago to try out in my garden.

So with the chipper in tow, I headed out to the backyard to put it to work, to see what it would do for spring clean up.

At our first stop, I cut down the “winter interest”, a variety of perennials I left standing last fall, mostly tall Sedum and Shasta daisies. 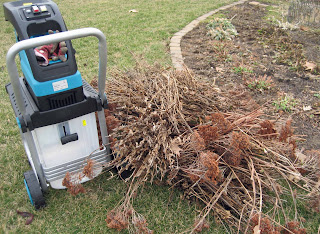 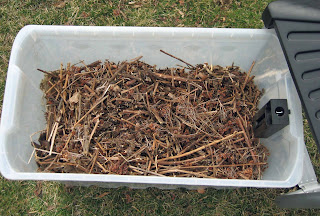 That’s everything all chipped up in one bin. When I previewed this picture with a few other gardeners, the most often made comment was that there are still some big pieces. More on that later.

Next I tackled the grapevine… 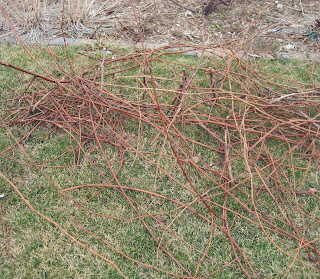 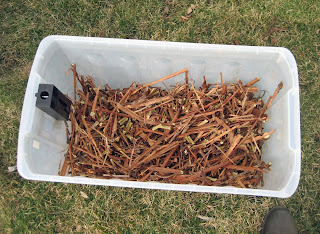 And so I continued around the yard.

This evening I went back out and did some more chipping, mostly perennials, and finished up the clean up in the back yard.

I love the portability of it. It was easy for me to pull around the yard to where I cut back the perennials and then chip them right there. With my other chipper shredder, I generally set it up back in the garden with a tarp cloth beneath it and then I hauled all the trimmings back to it. Both chippers, by the way, are electric so you can only go as far as your extension cord will let you.

I love the plastic bin that all the chippings fall into. With my other chipper shredder, I’d end up with a pile of stuff on the ground that I had to either scoop up and dump in the compost bin, or gather up in the tarp and carry to the bin that way. With this one, I just carry the plastic bin back to the compost bin. It’s large enough to hold quite a bit, but not big enough to be too heavy. It makes clean up nice and neat.

I love the relative quiet of it. For something that has a motor and is chipping, it doesn’t make all that much noise. I still wore ear protection, but then I usually do when running something that is consistently loud. Here’s a video to show it in action, with sound.

Disclaimer, I wouldn’t normally feed a branch quite that long into the chipper because it could whip around and hit you in the face if you aren’t careful. I also wore eye protection but never noticed any chips flying out.

Now, about the size of those chippings...

The directions are pretty clear that some larger pieces might not be completely cut up on a first pass, especially for softer material like I was chipping up. You can adjust the size of the opening to be smaller, which helps, and I also found that if I fed several dried stems through at once, I was less likely to end up with large pieces.

If you check out the electric wood chipper website, you’ll see a picture of someone chipping up much larger branches than I’ve attempted so far. I did chip up some redbud tree branches and they came out in nice little pieces. 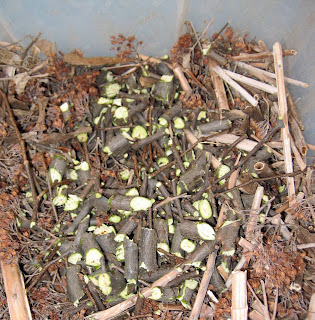 Those branches were probably about half an inch at the base. I personally don’t think I’d try to chip anything bigger than an inch in diameter and I think that’s probably going to take some time to chip, but I haven’t had a branch that big to try yet, so I still need to test that out.

Some other features I didn’t get to test…

What happens when it jams up. It is supposed to go into a reverse mode automatically if it jams up, but I never jammed it up, so I didn’t get to test this feature. I did at one point have some stringy stuff spinning around on the cutting wheel, but after feeding through a few dry sticks, it cleared itself. I do think it is less likely to jam up than my other chipper-shredder and that auto-reverse feature will be nice.

What happens with green plant material. It’s early spring here at May Dreams Gardens, so everything I have to chip is dried up or leafless. As soon as I have some branches with leaves, I’m going to run them through and see what happens. And this fall, I might even send a few corn and sunflower stalks through it and see how they come out.

In the meantime, I have some Spirea shrubs that I like to cut down to the ground every few years, and this is the year for it. Last time I did it, I ended up putting the trimmings in the trash. Not this year. This year, I’ll bring along my new chipper and chip as I go, right into the bin and then it will all go into the compost tumbler.

(The Crocus blooms have nothing to do with this post, I just thought they were pretty.)
reviews tools