Do Not Plant Palms Trees Outside In Indiana 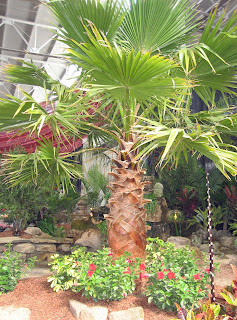 After several years of skipping it, I decided to go to the Indiana Flower and Patio Show now in progress out at the fairgrounds for the Indiana State Fair.

Typical of most indoor garden shows, there were several landscapes set up down the main aisle, presumably to give homeowners ideas of what they can do in their Indiana yards and to showcase area landscaping firms.

One of the displays featured palm trees.

I would like to state for the record that palm trees are not hardy in Indiana.

I can think of no one who would actually plant them in an Indiana garden. I have no earthly idea what the point of this particular display garden was, who it was intended to inspire, or why it included palm trees.

The other gardens all seemed to be trying to showcase stone work. If you could build it with stone, or pre-cast concrete forms, someone had built it for the show.

On either side of the main aisle, there were two more aisles where various vendors were set up to sell all kinds of gardening stuff and some stuff that was quasi-related to gardening, like cookware.

But no one was selling hoes.

What should a gardener do if she can’t find a good hoe at the flower show?

She should stop at the worm composter booth and buy a worm ranch! 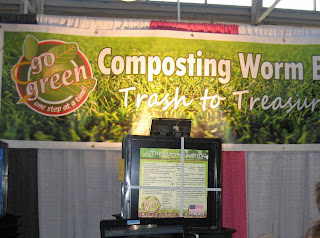 More about this later...

The flower show continues this weekend. If you are a member of the American Horticultural Society and show your membership card at the ticket sales window, you can get a complimentary pass to get in for free. Otherwise, it costs $12 to get in, but there are $3 off coupons all over the place, so no one should pay more than $9 to get in.

If you go, don't forget to check out those palm trees and worm composters.
gardening

Les said…
Did you know there are groups of people all over the northern latitudes trying to push the zones on palms? They get quite competitive with each other about which species they can get to live outside and what extroidinary measures they go to get them through the winters.
Sat Mar 21, 07:01:00 AM 2009

Laura said…
The garden center I used to work for sold palm trees the last couple years I worked there. It really confused the average homeowner- I'd have to explain that no, they aren't hardy here and no, I don't know why people would spend that much money on them when they would die over the winter.

Mr. McGregor's Daughter said…
There are Chicago gardeners who have tropical gardens, including Palm Trees. I think it looks all wrong. Just because you can do something, doesn't mean you should. This highlights what I loved about the Chicago show this year - all the ideas were practical & adaptable to home gardens.
Sat Mar 21, 08:15:00 AM 2009

Janet, The Queen of Seaford said…
Some people pull their palms in like you would other non hardy plants for the winter. In my mind it is too big to move on a regular basis.
I will be interested in reading about your worm ranch!
Sat Mar 21, 08:52:00 AM 2009

a said…
Maybe the palm would look good in your enormous Victorian-era conservatory? :)
I've always wanted a conservatory... played too much "Clue" as a child, I guess. It was always the best spot for a murder with a candlestick by Col. Mustard.
Sat Mar 21, 09:17:00 AM 2009

Anonymous said…
did you ever hear of the cabbage palm? grows in england, really weird, but then "they" are pushing more and more invasives to over spread the world, sad to me
Sat Mar 21, 09:23:00 AM 2009

Anonymous said…
There is a book written by I believe an Indiana gardener/author called "Palms Don't Grow Here and Other Myths." I believe his garden was a Zone 6. I think with TONS of coddling the Trachycarpus will survive although recently one of the blotanists in Seattle posted tragic photos of palm casualties. Who knows? Personally I don't even like them. They're too....poky. :)
Sat Mar 21, 02:10:00 PM 2009

Diana said…
Carol - It does make you wonder, doesn't it? Why would they tempt you with palms? And then the nerve of them not to have any hoes! I used my one child's sized hoe to prep my garden and it did a great job. Easy for me to handle and gets in those little weeds just right. Though you give me hoe envy with your amazing collection...I might need another...
Sat Mar 21, 02:22:00 PM 2009

Anonymous said…
Whew! Glad you set them straight on that one. What are they thinking anyway? They do the same crazy stuff here in Oklahoma. Happy Spring Carol!~~Dee
Sat Mar 21, 03:00:00 PM 2009

Rock rose said…
Some gardeners need a challenge I guess. Down here I always complain about nurseries who re selling tomato plants in September. It may be hot then but there is no way those tomatoes will do anything. I also wonder about the winter veg seeds they are selling now- like carrots and cabbage etc. Too late to be starting those now- except at places like the White House.
Sat Mar 21, 08:35:00 PM 2009

Muum said…
My DH found a guy 'arctictropical' here in Utah (Zone 4) who shields and protects his tender palms, banana plants, etc. and has quite an operation. Looks like too much trouble to me. (although I do have two jasmine plants that come in for the winter and out every spring). Artictropical's stuff can be seen at http://forums.gardenweb.com/forums/load/palms/msg0911185725730.html
Sat Mar 21, 11:21:00 PM 2009

KayGee said…
I didn't make it this year, but I did attend the gala event Noble Evening in the Garden on the Friday before it started. I was unsure how much there would be about "gardening" as opposed to "patio-ing".
Mon Mar 23, 11:20:00 AM 2009

ryan said…
It may not be as true in Indiana, because you guys get a real winter, but in California we have nicer, bigger, better, more mature plant specimens outside in the ground when the garden show happens, so the stone and wood and water feature and other garden details are actually the main reason to check out the display gardens. I think that's a big reason why the San Francisco show doesn't make any money, that there are more flowers outside of the building in the real world.
Sat Mar 28, 04:29:00 PM 2009

ndindy said…
I think the most hardy specimens could do ok in a protected area in Indiana. If it was protected from wind, had southern exposure and you burlapped it suing cold snaps it may be fine. Being on the northern edge of it would concern me. Indiana, Ohio and Kentucky all have months of sub freezing temperatures and a colder than normal winters could bring a week or two where hardly anything thaws. I have seen palms in north Carolina that are inland and in northern Georgia, and they tend to be small and freshly planted or anemic. Unless you are up for a challenge I wouldn't want the work.
Thu May 24, 09:18:00 AM 2012

IndianaPalmNinja said…
I have been growning Palms in Indiana for 5 years now. People are just too lazy to take the time to Winterize them. Its not hard to do also.
Mon Feb 26, 09:47:00 AM 2018