History of the Era of Procrastination at May Dreams Gardens 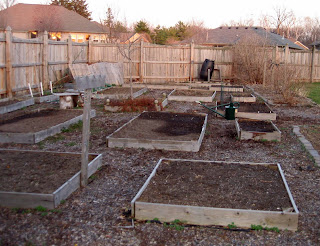 Yesterday, as planned, I sowed seeds in the garden for two kinds of peas, four kinds of radishes, seven varieties of lettuce, three colors of onions, one kind each of turnips, spinach, bok choy and Swiss chard, and three varieties of sweet peas. That’s twenty packets of seeds and one bag of onion sets.

When it was all done, I watered the newly planted areas with my new Haws watering can, then took a picture of Day One in the vegetable garden.

Once inside, I wrote down all I had done in my ten year garden journal and looked back over the entries for the previous years back to 2001.

Then I looked for the entry for 2006. I went forward through all of March, and then went back to earlier in March. No entry. Had I forgotten to write down this important rite of spring? Then I started looking past March into April and finally found the entry.

In 2006, I did not plant my early spring vegetables until April 9th.

Apparently in the early and mid 2000’s, there was an Era of Procrastination here at May Dreams Gardens.

I remember it now, how I waited too late to plant, which didn’t give the early spring crops enough cool days to really produce. I was constantly disappointed during this era, in myself and in the plants.

Then in 2007, I found a message written on a 20 year old packet of peas, and realized that the problem wasn’t the plants, it was me.

I was clearly suffering from Gardener’s Acquired Procrastination (GAP). I was letting excuses like cold and rain, too busy at work, and ‘just not ready’ keep me from planting early enough.

No more! I’ve learned my lesson. They’ll be no more gaps in my garden harvest created by GAP. Everything will be planted on time.

I remind myself that…

Spring days come but once a year. When there are good spring days, I need to take advantage of them and get out there and plant. Yesterday was sunny and in the low 70's, the perfect day to sow seeds.

A lot can be done in small amounts of time. Even if I have just 30 minutes, I try to prune a shrub or two, pull some weeds, or sow some seeds. It took me just an hour or so last night to sow all those seeds.

Preparation is important. Properly made and cared for raised beds can be planted early in the spring with very little preparation. Yesterday I just raked the beds smooth, pulled a few bits of henbit, and I was ready to plant.

Planning ahead helps. Is there ever enough time on a sunny day to do everything we want to do in the garden? I try to plan ahead on what I want to do, to be ready when the time comes. Then I don't have to do a lot of thinking about what I'm going to do while the sun is shining. I can just garden. The evening before I sowed seeds for this year's spring crops, I made up all the plant labels and pulled out the seed packets I needed and put that all in a basket, ready to take out to the garden the next evening.

It’s been three years since the end of the Era of Procrastination. It’s too soon to know what to call this current era, but it feels very positive. Before I know it, I’ll be making a fresh radish sandwich, eating fresh lettuce from the garden, and sampling the first ripe peas.
vegetable gardening

Kathy said…
It's good to know that procrastination can be overcome. I doubt it is ever cured. There can be lapses if you're not careful. The best motivation is learning from experience what can happen when you procrastinate. In your case, crops that don't produce as they should. In my case, catmint with lots of dead stuff that wasn't cut out soon enough, making for a tedious chore after new growth had started. This year the catmint was cut back on the first nice day.
Wed Mar 18, 06:30:00 PM 2009

Kerri said…
Congratulations on overcoming procrastination these past couple of years. It rears it's ugly head far too often around here.
Our ground is still too cold. No sewing will be done here for a while.
Meanwhile I've begun sowing seeds and noticed the first sprouts today. It's wonderful to see something growing!
We have rain too, and there's a bit of snow in the forecast.
Wed Mar 18, 07:25:00 PM 2009

Anonymous said…
Extremely interesting post, Carol. I wouldn't have ever thought you were a procrastinator. You just don't seem the type. I had to learn that lesson too about gardening. Now, if only I could convince myself to write it all down.~~Dee
Wed Mar 18, 07:52:00 PM 2009

Cindy, MCOK said…
You reminded me ... I've been procrastinating myself when it comes to my garden journal. I'm going to get my notes right now and fill out the missing entries!
Wed Mar 18, 08:41:00 PM 2009

growingagardenindavis said…
I'm trying to get better about writing in my journal. I love that you can look back so easily to find things...you are an inspiration!
Wed Mar 18, 09:53:00 PM 2009

Anonymous said…
I'm already behind for our "second wave". Our last frost date has passed and although I managed to get the tomato plants in, I haven't planted any of the seeds I bought mail order yet. I haven, ahem, even planted the white marigolds you so generously sent me.

Yolanda Elizabet Heuzen said…
It seems your GAP is on the wane, excellent! Your reference to a fresh radish sandwich made me laugh, it's amazing what effect a bit of writing and a pic or two can have on our fellow gardeners. I'm chuffed to bits that I'm responsible for people tucking into radish sandwiches worldwide. :-D

Rock rose said…
I'm afraid I have failed to embrace the garden journal thing. I don't think I am capable. The best I can do is post on the blog and hope that it will survive and that has only been for the last year.
I know that pen and paper is the only way to be sure that something gets passed on but with the genealogy to write there is no time left for the garden journal.
Thu Mar 19, 07:41:00 AM 2009

Daphne Gould said…
This year was my year to end the GAP and plant on St. Patrick's Day. The peas still aren't in, but this time it isn't my fault. Really I swear. Half of the pea bed is still frozen. I did plant my spinach though. That bed has thawed out fine.
Thu Mar 19, 11:17:00 AM 2009

Marion Adams said…
GAP seems to affect me the worst in Late August and September when it's so hot that I can't bring myself to sow winter vegetables, but wait until late October and it's too late! I'm totally inspired to use my garden journal as a stop GAP measure! Marion
Thu Mar 19, 02:14:00 PM 2009

Weeping Sore said…
Your case of GAP doesn't sound too serious to me. I'm forcing myself to wait until Spring officially arrives before planting my warm season veggies. I can't wait to see pictures of your veggies as they grow. Happy harvesting!
Thu Mar 19, 03:32:00 PM 2009

Anonymous said…
Favorite Aunt Carol,
My third graders and I are going to plant seeds in April. Do you know of any plants that are native to Indiana that are hard to kill that we could plant?

Carol Michel said…
All, Thanks for the very nice and wonderful comments! I'm happy to find out that I'm not the only one with GAP's in her gardening! I'm also very happy to have my spring veggies sown early enough to enjoy them.

LINDA from Each Little World said…
Thanks for reminding me that I don't need a big block of time to get something done in the garden. At this time of year there are lots of big projects and it's easy to procrastinate!
Fri Mar 20, 10:00:00 AM 2009

Anonymous said…
You're sowing outside already in zone 5!? All the packets I have left (herbs, zinnia, cosmos, sweet pea, the like) say to wait until after last frost to sow outside (generally around May 1 here). Do I not need to do that? (I'll be sowing in pots outside, mostly - I'm in zone 7A). I'm so confused now!! And I'm all out of space for starting more indoors.
Fri Mar 20, 05:52:00 PM 2009