Spring Rites In and Out of the Garden: Picking a Vegetable Champion 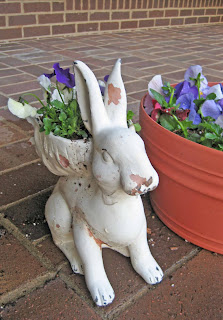 Welcome, Spring! Welcome to the vernal equinox, the very beginning of spring, which is at 7:44 AM EDT on March 20th.

Welcome, too, the Rites of Spring in and out of my garden.

I performed an important rite of Spring in the garden on March 17th, when I planted peas and all the other early spring vegetables in the raised bed vegetable garden. Then last night, I performed another rite by potting up violas and pansies to decorate my front porch and a front window box.

More rites will follow in quick succession… setting up all the patio furniture, hauling out all the garden decorations, and watching as new blooms pop up every day, like these miniature daffodils. 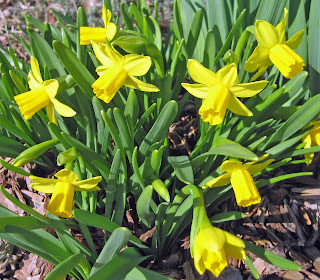 These rites are comforting in their sameness. They remind us that the garden continues, as it always has, oblivious to what happens in the world outside the garden gates.

One of the other rites of spring outside of the garden, at least in the United States, is the men’s and women’s NCAA college basketball tournaments which started yesterday.

Millions of people, who rarely pay attention to college basketball most of the year, will complete a rite of spring by filling out the tournament brackets to see if they can score the most points by picking which of the 64 teams will win in the first round, which 32 remaining teams will make it to the ‘sweet sixteen’, then the ‘elite eight’ and finally the ‘final four’ and eventual champion.

All day yesterday, people asked me if I had completed my picks.

I hadn’t and I didn’t. I rarely fill out the brackets. But if I had done so, I would have picked my alma mater, Purdue University, to go all the way to the championship, both the men and the women. I always do.

But I was asked so often about my picks that I was feeling a little left out of all this “March Madness”, this special rite of spring.

So I decided to practice my own kind of picking, not for basketball, but for the vegetable garden.

By using the same method people use to pick basketball winners, I picked which vegetable of the 67 different varieties of various vegetables I’m growing in my garden will be my favorite, the champion of my garden.

How did I do that, you wonder?

First, I tossed out three vegetables that I’m not that excited about, to get the number down to 64. Sorry, but Bok Choy, lima beans (I don’t know why I’m growing them, I don’t even like lima beans) and ‘Snowbird’ peas did not make it to the ‘big dance’ of this vegetable tournament.

This gave me a lovely list for the ‘sweet sixteen’, which in the basketball world is how many teams will make it out of this weekend’s tournament games to advance to the next round.

With me so far?

Then I sorted my list of 16 remaining vegetables by the variety name and deleted the bottom eight, leaving me with eight left in the contest. In the basketball world, this group is called the elite eight.

One more sort by the last letter of the variety name, or something like that, and I eliminated four more vegetables to give me the “final four” contenders in my vegetable garden contest.

Then I used an online random number generator to give me the number “2”, making the second vegetable on my remaining list of four the winner of the May Dreams Gardens Vegetable-Equivalent to the NCAA Basketball Tournament.

And the winner was a variety of summer squash called ‘One Ball’.

I think the tomato variety ‘Aunt Anna’ has a legitimate chance of being the best vegetable to come out of my garden this summer, don’t you?

We’ll know the winner of the NCAA men’s and women’s basketball tournaments in early April. But we’ll have to be a bit more patient to find out the winner of the best vegetable contest, as I won’t know for sure which one it will be until later this summer.

Did you follow all that? Did you fill out your brackets for the basketball tournament? Did you pick my Purdue Boilermakers? Or some other team?

If you do this champion picking for your vegetable garden, by my method or any other method, I’d love to hear what your pick is. What vegetable variety do you think will be the best vegetable in your garden this season?
humor spring vegetable garden