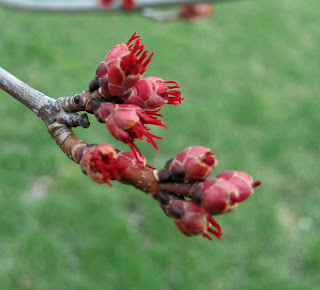 My soil temperature a few days ago was 48 F, but earlier this evening it appeared to be down to 45 F. I suppose that is because of the rain last night and the lower temperatures today.

I’d like the soil temperature to be closer to 50 F before I plant peas and other early spring crops on March 17th. 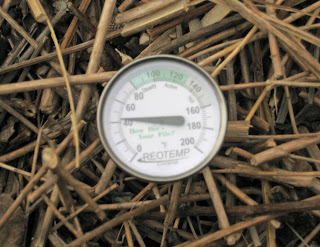 I suspect it is also cold in the compost bin because I didn’t have enough green material to add last fall.

By the way, the temperature in the compost tumbler was a little higher, but not much. I didn’t expect it to be very hot because the compost in it was pretty much “done”.

How did I end up with a weather station, a soil thermometer and now a compost thermometer? And would this be a good time to admit that every day for the last eight plus years I’ve written down the high and low temperatures for the city in my garden journal, as reported in the local paper?

And in the morning, when I’m recording the temperatures for the previous day, I look over the historical temperatures to see if it is colder or warmer than previous years.

I might be slightly obsessed with temperatures, especially this time of year, but I’m not alone with checking temperatures of everything like this. I think most gardeners pay more attention to temperatures because temperatures can make or break our gardens at some point.

Depending on the temperature, we’ve got stuff to do! 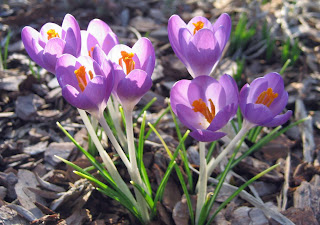 You knew I’d work in a crocus picture, somehow, right? In fact, these crocus blooms reacted to the warmer temperatures by opening, too. They are a little sneak preview of what's going to be blooming in my garden for Garden Bloggers' Bloom Day on the 15th.

If it’s going to freeze, and it isn’t a good time for a freeze, we are out covering up the plants to protect them. By the way, the reason we cover is so that when the heat absorbed by the earth during the day radiates up at night, it will be trapped under the cover, providing enough warmth to keep the plant from freezing. I sometimes see people wrap up the tops of small trees, like they were lollipops. That is not going to keep them from freezing. 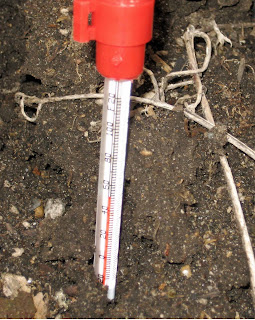 If the compost isn’t heating up, we try to add more green material or water or something to get the bacteria to make the compost.

And if it is going to be hot outside, we try to stay in the shade, following it around the garden as we weed and water.

We can’t control these temperatures. We can only measure them and react to them. And as gardeners we do a LOT of measuring of them… at least this gardener does.