Easter Greetings from May Dreams Gardens.

What a beautiful day we had in central Indiana. We had a bit of frost in the morning, but ended up with clear blue skies and temperatures warming up to the mid-fifties by early afternoon.

I had my family over for lunch and the big annual egg hunt. I think there were 21 people here. We had a great egg hunt and all the hunters went home with bags full of candy and money and other goodies. As you can see from the picture, many of the eggs are pretty easy to find, but others are pretty well hidden, like this egg in the hellebores. 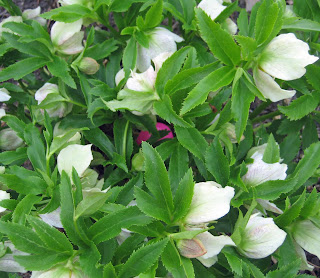 I usually find one or two eggs later in the spring, and of course, I hope there is an egg out there in the fall for the Halloween Hare to find. Ha ha.

Out in the vegetable garden, not much has changed, or appears that different from a week ago. All the spring crops are sown and the first crops have germinated and the second crops must still be “thinking” about it because I don’t see any seedlings for them yet.

In the flower beds, I have the usual spring flowers blooming. I’ll report more on those for Garden Bloggers’ Bloom Day on the 15th. (I can’t believe that is in just three days).

All over the garden, I need to weed, and weed, and weed some more. I tried to get some of my nieces and nephews interested in that today, but it was “no go”. They saw right through my tactic!

Inside, I finally got some worms for the new worm composter on Wednesday when I wasn’t expecting them. I thought I’d get an email that they had shipped but they just showed up one afternoon. The email I was expecting showed up this morning, four days after I got them!

The box was kind of wedged in the mailbox, so it took me a few minutes to “wiggle the red wigglers out of there”, and then I rushed around to get the bin all set up. I hadn’t done that yet, either, because I was waiting on the email to let me know they were coming. It was sort of like coming home and finding some house guests that you thought were coming next week sitting on your front step waiting on you.

I’ll write later about how the worms are doing, but so far, I think I have everything set up right and they are settling in to their new home, out in the sun room. Don’t tell anyone, but one of them did get loose and I found him about ten feet from the bin, dead. Let that be a lesson to the other worms. Stay in the bin where there is food and shelter!

And now I need to end this letter and take a little bitty nap. I’m tired, having gotten up early for church and then having everyone over for lunch and the egg hunt. Next week I hope to have more to report on the vegetable garden other than “seedlings are growing”.

Between now and then…

Flower and veggies to all,
Carol

P.S. I still haven’t covered the early spring crops with row covers. I haven’t seen any rabbits around, so I keep hoping there are no rabbits. But I know I should cover the seedlings anyway, or maybe I’ll set up a fortress made with plastic forks, because the rabbits are surely out there. I bought 600 plastic forks the other day and have at least 560 left over after lunch today.

But realistically, I’ll probably get the row cover out later this week after I thin the lettuce a bit and use that instead of my fortress method. The “plastic cutlery fortresses” do look a little bit odd and always have to be explained. Plus, I don’t know how well they really work. I just know the spoons around the green beans seemed to help keep the rabbits away last summer.

This is the sixth letter in a weekly series of letters that I’m exchanging with. Dee from Red Dirt Ramblings in Oklahoma (zone 7b) and Mary Ann, the Idaho Gardener in Idaho (zone 6) to highlight the differences and similarities in how we garden and grow vegetables.
letters to gardening friends vegetable garden

Cindy, MCOK said…
It sounds like Easter was a festive day at MDG! Perhaps the Easter Bunny had a cautionary word with the neighborhood rabbits regarding your veggies? Time will tell!
Sun Apr 12, 07:06:00 PM 2009

Dee/reddirtramblings said…
Carol, it sounds like a lovely Easter Sunday and egg hunt. It rained here all day, but we were grateful for the rain. My seedlings aren't doing much but growing either.~~dee
Sun Apr 12, 10:43:00 PM 2009

Kerri said…
It sounds like a busy, but delightful Easter celebration was had by all at MDG, Carol.
Perhaps the bunnies were being polite and waiting for an invite. But probably not :) I hope they don't surprise you and show up out of the blue like the worms did.
Good luck keeping those wild worms corralled!
My seedlings are growing enthusiastically under lights in the house, but nothing new has been planted in the cold ground of the veggie garden yet. And the cold winds still blow!
Mon Apr 13, 09:37:00 AM 2009

healingmagichands said…
I hope you have more luck with the worm composting than we did! Sounds like you had great weather for Easter, we enjoyed rain all day.

You might find the row cover works better than plastic cutlery to keep the rabbits out. I always cover my brassicas and keep the cover on until it is time to harvest. They seem to appreciate the little shade and NO cabbage loopers get laid on them.
Mon Apr 13, 12:50:00 PM 2009

Victoria Summerley said…
Happy Easter, Carol! Hope you get some more sunshine soon so that you can get on with your gardening.
Mon Apr 13, 01:22:00 PM 2009