April 05, 2009
This is the fifth letter in a weekly series of letters that I’m exchanging with. Dee from Red Dirt Ramblings in Oklahoma (zone 7a) and Mary Ann, the Idaho Gardener in Idaho (zone 6) to highlight the differences and similarities in how we garden and grow vegetables. 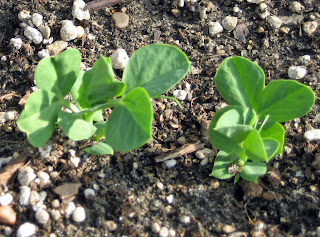 Greetings from May Dreams Gardens. Writing these weekly letters sure heightens the sense of time and the days flying by. Where did that week go? Can it really be Sunday again?

As you can see from the picture, the peas are up in the vegetable garden and actually look like little pea plants. I’m growing two varieties this year, an edible pod variety called ‘Snowbird’ and a “regular” pea called ‘Green Arrow’, which I’ve grown successfully the last several years. I also have three varieties of sweet peas, and they’ve germinated, too.

At this point, I know that I really should get out the row cover to cover the pea plants and everything else that has germinated to protect them from the rabbits. But I just hate to do that because the row cover isn’t all that attractive.

So instead I’m playing a little game of “stare down” or “chicken” with the rabbits. Who will make the first move? Me by covering the rows? Or the rabbits by taking the first bite out of my defense-less little pea plants?

Or maybe the rabbits are gone and won’t be around this year? Maybe they’ve moved on to greener pastures? I can hope, but I know that’s probably not true because none of my neighbors have vegetable gardens, so I think my garden is the greener pasture.

In the meantime, while I play these mind games with the rabbits, I keep planting. Earlier today, before we got a deluge of rain this afternoon, I sowed more lettuce seed out in the garden, hoping to extend the harvest by a few weeks. I’ll get some good lettuce for awhile as long as it doesn’t get too hot too soon. Once it gets hot, the lettuce and the spinach will turn bitter and even the rabbits won’t eat it.

I also sowed seeds inside for nasturtium and basil, both to go in the vegetable garden, and some seeds for other flowers to go elsewhere.

Though I think a vegetable garden is pretty all on its own and take umbrage with those won’t don’t, I always plant a few flowers in and amongst the vegetables to make it even prettier.

On my flower list this year besides the nasturtiums are zinnias, marigolds, and sunflowers, which I’ll direct sow in the garden once the danger of frost has past. Around here in zone 5, actually 5b, that’s usually May 15th.

This coming week, I have some frosty mornings to look forward to, and some chances for snow showers. Doesn’t that sound nice? The HIGH temperature tomorrow is supposed to be 39 F. Just like the weather you both have been getting! Our weather always comes out of the west, more or less, so I can blame you both for it, can't I?

I know that what’s growing in the vegetable garden right now will survive all of the frost, but I worry about the apple tree in the center of the garden. If we have too much frost when it's blooming, I won’t get any apples, again. It’s too big to cover, and I don’t have any smudge pots, so I will just have to hope for the best.

But the weather is supposed to improve so that by next Sunday when I have my entire family over for Easter, we’ll be able to have the Big Easter Egg Hunt outside. None of the vegetable plants will be big enough to hide an egg, but I’ve got some nice weedy spots elsewhere in the garden that will make good hiding places. A lot of those plastic eggs will have money in them, so if one or two don’t get found, they’ll make nice discoveries for me in May. Just more riches of gardening!

Flowers and veggies to all (except the rabbits),
Carol

P.S. Did you all remember that this weekend is the first anniversary of all of us meeting at the spring fling in Austin?
letters to gardening friends vegetable garden