The Secrets of the Plant Stand 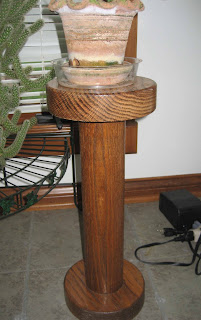 The other day, on Sunday, I was messing around with seeds in the sunroom and bent down between this antique wooden plant stand and a nearby seed rack to adjust a light timer. Wouldn’t you know it, I misjudged how wide my backside is when I bend down, and I knocked the plant stand over.

I managed to somehow catch in mid air the Chicken Foot Orchid that sits atop the stand, saving myself from having to clean up a really big mess. But when the plant stand hit the ceramic tile floor, the top of it broke off.

As I went to pick up the pieces, I realized that the plant stand, which is made of a hand turned piece of wood, was actually hollow inside, and I could see just a tiny slip of paper peaking out of it.

I could not have imagined what I would find as I pulled out that piece of paper and several others as well!

As best I can figure out, my great-grandfather, who made the plant stand, used it as a time capsule to commemorate the birth of his son, my grandfather, in 1901. Who knew there were secrets in that plant stand?

The contents were fascinating and included this cover of a 1901 seed catalog from the Mills’ Seed Company of Rose Hills, NY. 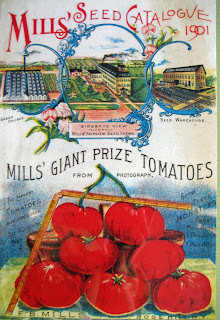 Amazingly, it's in near perfect condition, having been kept nearly dust-free and away from any light in that hollowed out plant stand.

Some of the other documents I found inside the plant stand included:

- A picture of Theodore Roosevelt, on which someone, presumably my great-grandfather, wrote, “Our New President, September 14, 1901”.

- A bill of sale for some chickens he must have sold for seven cents a pound.

- A bill of sale for horse shoes for three horses, but I can’t quite make out the prices. I know that around the turn of the century, when my grandfather was born, they farmed mostly with horses and mules.

There were also several seed packets which weren’t opened, but I’d guess any seeds inside have long ago turned to dust.

These are wonderful documents and artifacts to have, but admittedly they have mostly sentimental value to me and my family, knowing that my great-grandfather not only made the plant stand, but also chose what to put inside it.

Perhaps what is of most value, monetarily, is a U.S. Savings Bond that appears to have been issued on November 16, 1901, which is the day my grandfather was actually born. I wonder how much it might be worth today?

I don’t think my Dad knew about the contents of the plant stand when he picked it out as a family memento he wanted to have, and I don’t know if either my grandmother, who must have had this in her possession for decades, or my aunt, the keeper of the family history, had any idea either about what secrets it contained.

Later today, I’m going to take all the documents and artifacts I found to the local historical society to make sure they are all authentic and determine if they have any value. If they are real, we’ve agreed to arrange for a little press conference of sorts to share them with the local media.

I have no reason to think these aren’t all authentic documents, but I am curious about one hand written note that starts out with…”April 1, 1901, let the reader beware...”

I’ll keep everyone updated as this story unfolds, or rather, unravels.