There's A Daylily In There Somewhere 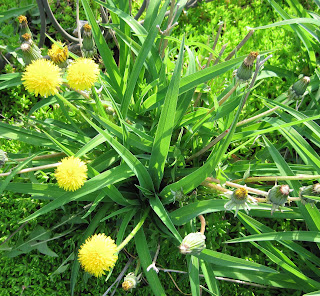 In other words, I had to perform a dandelionectomy, which is sometimes referred to as a taraxacumectomy by some high-brow haughtyculturists.

Some plants can withstand this procedure, while others can not. Fortunately many daylilies, including this ‘Stella d’Oro’ that I swore I was getting rid of but haven’t, can easily withstand a dandelionectomy.

Warning! This type of weeding is advanced in nature. It requires a bit more time than most weeding because it must be done “ex terra” which is Latin for “out of soil”

Here’s a rundown of how to do this procedure on daylilies.

First, dig up the entire daylily with the dandelion.

Then, using your bare (or gloved) hands, forcefully remove the dandelion from the daylily. This may result in extra daylily divisions, called "fans", so don't be alarmed if you end up with more daylily plants. In some cases, you may need a sharp knife to cut away the dandelion roots. 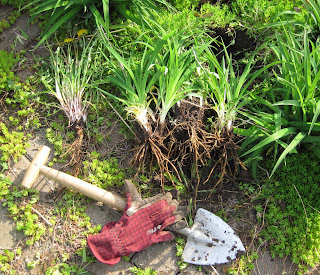 As you can see from this picture, I ended up with one dandelion, on the left, and three or four daylily divisions as a result of this dandelionectomy.

Once you’ve removed the dandelion by hand or by knife, toss it out, and then replant the daylily in the spot where it was dug up. 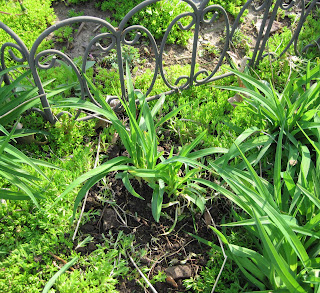 After the dandelionectomy, if you do have a few extra divisions of the daylily, plant these somewhere else in your garden, or give them to a friend.

Oh, by the way, if you want to dig and divide your daylilies, you can follow this same procedure, but skip the part about removing the dandelion. Just split up the daylily into separate "fans" and replant.
humor weeding