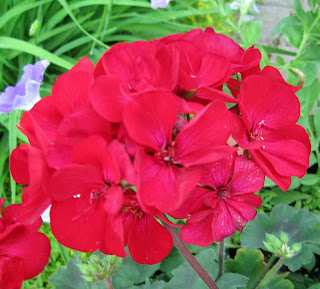 At some point in a gardener’s education, whether through book-learnin’ or in the school-of-hard-clay-soil-and-dead-plants, a gardener will learn or be told that what they call “geraniums” are not the true geraniums, they are Pelargoniums.

But the name “geranium” is so associated with Pelargoniums, that we are all forced to go around and call the other Geraniums, the real ones, the “true geraniums”, just in case someone mistakenly thinks we are talking about Pelargoniums when we are talking about Geraniums, the real ones. Or we could call the true Geraniums false pelargoniums, but that seems to be sort of like putting plastic flowers in your garden, as does calling the Pelargoinums “false geraniums”, even though there are other flowers we call false, like false forget-me-not’s, false indigo, and false sunflowers, to name three very quickly, that have nothing to do with plastic flowers.

With me so far? We should really make an effort, start a movement, to get rid of all this true and false flower naming business and call a flower by it’s true name. Who’s with me? I suppose The Society could take up this cause. I’ll ask the president and see what she thinks. After all, when last The Society met, they were considering a name change of their own, a cause which has been abandoned because really, is there a name better than the Society for the Preservation and Propagation of Old-Time Gardening Wisdom, Lore, and Superstition (SPPOTGWLS or “the Society”).

Anyway, whatever you call them, you ought to make a little room in your garden for Geraniums, the “true geraniums”, which by the way are also known as “cranesbill”, a common name probably used by gardeners who have already decided to avoid “true and false” names.

So out of respect for those gardeners who have abandoned all the true and false names, here are some cranesbills in my garden today. 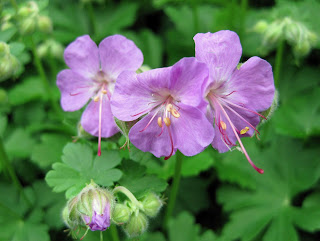 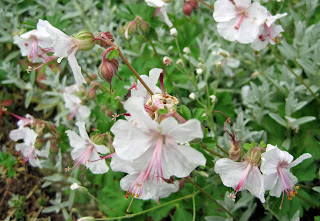 Geranium passalongia ‘Sister Who Does Not Garden’ 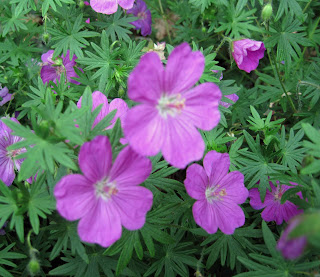 Geranium notagia ‘Why Did I Buy A Plant With No Tag’. 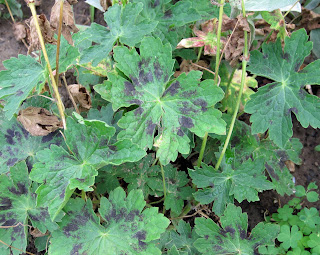 In my defense, I did ask about this cranesbill before I bought it and they told me it was called something that sounded like it started with “sam”. But when I did some online searches, I came up with nothing. It has pretty leaves, though, don’t you think?
perennials society

Dig, Grow, Compost, Blog said…
Well I think the Society has a ways to go yet. So far not one person has asked for Pelargoniums at the nursery I work at. And I've never seen the true geraniums in any nursery around here. So for folks around here, a pelargonium is a geranium and the only geraniums there are! So I think the Society should beef up their marketing budget. :-)
Mon May 25, 07:59:00 PM 2009

Mr. McGregor's Daughter said…
I call Pelargoniums "Pelargoniums," and Geraniums "Geraniums," and I tend to forget the name Cranesbill. That said, I think "Geraniums" are some of the hardest working plants in the garden, absolutely must haves, in more than one variety.
Yours are lovely, even those in need of a name. If your "Geranium notagia" likes shade, it could be G. phaeum 'Samobor.' It's beautiful, even without blooms.
Mon May 25, 08:13:00 PM 2009

I think I have many notagia in my garden. :)

Helen said…
You're funny, Carol. They're luffly ladies, whatever we call them. I have been known to call both "geraniums" at time, however the word does pop out from a different part of my brain, depending on which is which. I think they know.

KayGee said…
I always differentiate between the two with: annual geranium and perennial geranium. Most non-gardeners only know the annual kind.
Tue May 26, 10:32:00 AM 2009

Kim said…
I sometimes use Cranesbill. I have a notagia that looks just like your Geranium x cantabrigiense ‘Biokovo’ and I have one called Tiny Monster that is NOT tiny at all. It's very rangy and all over the place, while my notagia that looks like your Biokovo is very neat and orderly.
Tue May 26, 09:00:00 PM 2009

Unknown said…
A delightful post, as always, Carol.
I wonder if your LOLA (Lost Label) plant isn't one of the phaem, or Mourning Widow, cranesbills? Possibly Samobor (which I think is also 'Springtime', though my Springtime has a lot more variety in the colour of the foliage.
Thu May 28, 08:06:00 AM 2009