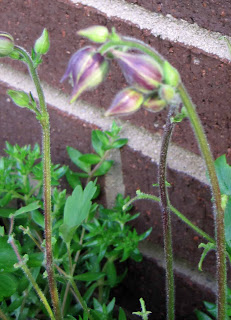 Hi, Readers! Black Barlow’s my name and Columbine is my game. I’m from the Aquilegia clan and I live her at May Dreams Gardens, up by the house, just to the left of the water spigot.

I don’t know how I got planted here, kind of out of the way, but I’ve done my best to bloom each spring, for nearly ten years now.

I’ve never had any problems except those ol’ leaf miners, but all of us columbines get those, so that’s no big deal.

But then the other day, just as I was putting out my best buds, something or somethings came along and started eating my leaves. I don’t know how long they were here but by the time Carol saw them, I was nearly leafless on one side.

Turns out I had been attacked by something called columbine sawfly larvae. We’ve never had them around here, so Carol had to look it up on the Internet by doing a search on “columbine leaf eaten”. Then she blew up a picture she’d taken of my half-eaten leaves and confirmed that’s what they were. 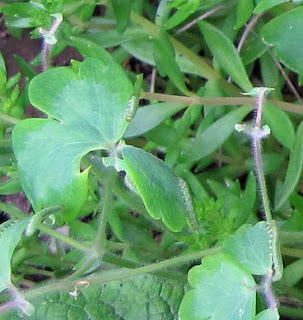 The next day, she came by and with her bare hands, she removed as many of those larvae as she could find by just gently pulling my leaves, or what was left of them, through her hands, and then throwing the larvae that came off onto the ground where she stepped on them. Then she sprayed my remaining leaves with an insecticidal soap and the rest of the larvae curled up and fell off, and she squished them, too, for good measure.

I was sure glad to be rid of those little buggers!

Then she went around and inspected all the other columbines in the garden. Turns out those larvae were on one other plant, but she took care of them in similar fashion.

All is now right in our world of columbines here at May Dreams Gardens. I still hope to bloom this spring and I think I can. And I hope Carol will take some nice pictures to show that in spite of half my leaves been eaten by columbine sawfly larvae, I’m still a handsome flower.

Bloom where you’re planted and have a wonderful spring!