Have You Ever Hoed A Deck?

I hadn't until Lowell's Tools sent me two new hoes to try out and review, including the Deck Digger.

Since I don't have a deck, I went looking for one that looked like it needed to be hoed and ended up at my sister's house with the Deck Digger in hand. 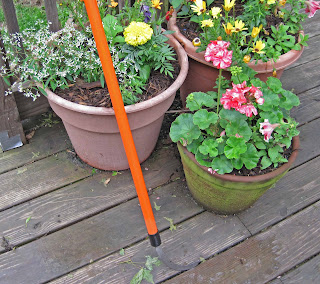 My brother-in-law had commented on Mother's Day that he was trying to get his kids to help remove the debris from between the boards of their deck and gazebo so they can seal the wood. With kids, dogs, cats, and nearby trees dropping leaves, flowers, and other debris, their deck gets a lot of good use.

They eat out there, play out there, sit out there, cook out there. They are "out there" on the deck and gazebo all through the summer.

Over time, with all that use, the cracks between the boards do fill up with crud.

So I took the Deck Digger in hand and proceeded to "hoe" those cracks between the boards. 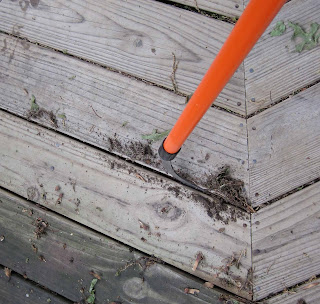 Yuck, look at all the crud it dug up! That is actually stuff that I hoed up from between those boards. No additional crud was brought it to make it a better picture, I promise!

The working end of this hoe is this flat curved shaped blade. 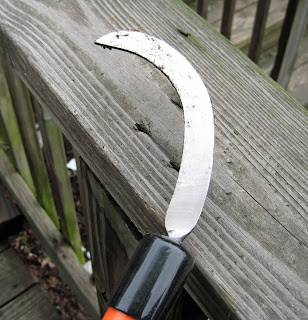 It fits in between the boards so you can dig up all the crud that gets stuck in there. And as you can see above, it did a good job.

The only problem I had, which isn't a problem with the tool per se, is that where boards on the deck were spaced too closely together, the tool can't get in between the boards. Proper spacing between boards, according to several sites I checked, is about one-eighth of an inch. My brother-in-law did say that the guy who built their deck didn't pay attention to that like he should have, so some boards are too close together.

After I tried out the Deck Digger for awhile, I was nice enough to leave it with my brother-in-law to finish hoeing the deck. After all, why should I have all the fun?

Thank you again to Lowell's Tools for sending me this specialized hoe to try out. 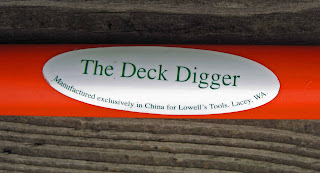 I'll be adding it to my hoe collection post in the next day or so, along with the other hoe they sent me to review, the Let-Us Weeder. I'll be reviewing it the next few weeks.

And now, should someone ask me if I've ever hoed a deck, I can say "Why, yes I have, matter of fact!"

ryan said…
I've never hoed a deck, though our deck could use it, surrounded by bamboo, wisteria, and pandora pandorana. We sweep it constantly. We actually get volunteer seedlings between the boards and I layer our rubus by directing the runners into the deck until they send out roots.
Sat May 16, 04:48:00 PM 2009

Patina said…
I had no idea there was such a tool out there! I have lots of jasmine on the edges of my deck, what a mess when they drop flowers. I usually use the hose, but feel like it's wasting water, great tip!
Sat May 16, 06:19:00 PM 2009

Rose said…
Your brother-in-law is a lucky man to have someone come and hoe his deck for him! I've never seen a deck hoe before, but it looks a lot like the bean hooks we used to use when I was a girl to pull weeds out of the soybean fields. I prefer never to see one of those again:)
Sat May 16, 10:19:00 PM 2009

Unknown said…
Carol, really, is there nothing you WON'T try to hoe? I mean, we know you have a thing for hoes...but seriously, this is a neat tool and I'm glad you're finding it useful. I'm also enjoying reading up on the bloom day reports though I'm not doing one myself as such. Maybe in June.
Sat May 16, 10:43:00 PM 2009

Dee/reddirtramblings said…
Well, of course, the Queen of the Hoes would know how to hoe a deck. That tool reminds me of when my sis & I would take toothpicks to the edging around the sink. Gross, I know, but ever so satisfying.~~dee
Sat May 16, 11:25:00 PM 2009