Mother's Day Blooms In My Garden 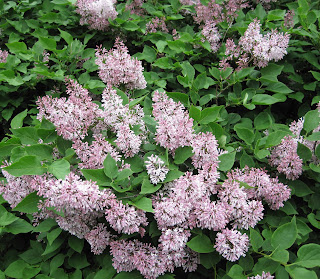 Yesterday at the garden center, I overheard someone tell the cashier that they were out of common lilac. My first thought was “Good, because there are better lilacs to plant in your garden.”

Yes, there’s a place for the common lilac, Syringa vulgaris, in large gardens, perhaps as part of a mixed border to help hide its primary issue, powdery mildew. It really doesn’t matter what you do, common lilac shrubs will get powdery mildew. And by the way, around here they start to bloom around mid-April, when it is still too cold for some people to spend time out in the garden sniffing the fragrant blooms. If you insist on planting a common lilac, at least get a named variety

I prefer, and recommend to others, to plant the ‘Miss Kim’ lilac, Syringa patula, ‘Miss Kim’ instead. It doesn’t get quite as large as the common lilac, doesn’t get powdery mildew and also blooms a little later, around Mother’s Day, with a strong, sweet scent.

And for those who want the lilac fragrance in a smaller shrub, I suggest the Meyer Lilac, Syringa meyeri. It blooms in my garden after the common lilac, overlapping with the blooms of the ‘Miss Kim’ lilac.

My lilacs, both ‘Miss Kim’ and the Meyer Lilac, are in full bloom right now. Early tomorrow morning, I’ll cut a few blooms, some that are not quite open, for a nice bouquet for my Mom. If you cut some blooms of lilac of your own to enjoy indoors, be sure to crush the ends of the stems to help ensure they can take up water. 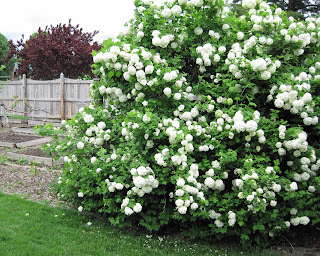 Would you like a large shrub in your garden that blooms around Mother’s Day, at least here in Zone 5? Then plant a Snowball Bush Viburnum, Viburnum opulus ‘Sterile’. I planted one in my garden for old time’s sake because my maternal grandmother had one in her garden and I remembered those big balls of white blooms in the spring.

Later, I found out that my other grandmother also had one in her garden, but I never visited there in the spring so I never saw it in bloom. My aunt told me that they used to wear flowers when they went to church on Mother’s Day; a red flower, like a rose, if your mother was still alive, and a white flower, if your mother had died. She said my great-grandfather, who’s mother had died, always wore a big Snowball Bush bloom on his lapel on Mother’s Day.

I find these blooms are best enjoyed on the shrubs. Once picked, they seem to quickly droop and shatter.

There’s not much to this shrub after it has bloomed. It doesn’t produce any seeds for the birds to eat, but does provide great shelter for them throughout the year. And in my garden, it helps to hide the compost tumbler in the garden. (Not that I think the tumbler needs to be hidden or anything like that. I love my tumbler, but it just sort of worked out that it sits behind the shrub so it isn’t a focal point in the garden.)

Lily of the Valley 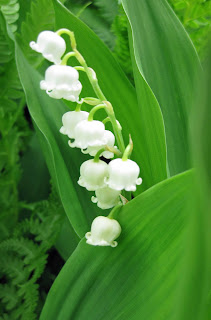 I’m fortunate to have always lived where the Lily of the Valley, Convallaria majalis, bloom.

Lily of the Valley is generally sold as “pips”, and seems to be quite expensive for just a few pips, considering that this is a great passalong plant. I usually dig them out early in the spring, or whenever I can get to them, and then replant them where I want them or give them away. They do prefer shadier, moist locations, and once established, some people think they are almost invasive.

But really, how could such a lovely fragrant bloom ever become a thug in the garden?

When I was a kid, we would go to my grandmother’s house in Indianapolis and pick Lily of the Valley, perhaps on Mother’s Day. She had a very large patch of it, on the north side of her house.

I noticed the other day that my Mom had a little vase of Lily of the Valley in her room that my little seven year old nephew had picked for her. I’m happy to see the tradition continues of picking Lily of the Valley for our mothers and grandmothers around Mother’s Day.

What blooms in your garden for Mother's Day?
family holidays perennials shrubs

shanon said…
My favorite Mother's Day flower is a lily. It's my favorite because when I was in 1st grade I won a coloring contest, and as the winner, I could bring my mom to the local grocery store and pick out a corsage for her to wear on Mother's Day. Together we picked a yellowish lily with a burgundy center. (Haha, now that I think about it, I wonder if it was not an orchid?!) But, I always think of it as a lily... and I was so proud that day. =)
Sat May 09, 07:52:00 PM 2009

Lisa at Greenbow said…
Much the same as your garden only I don't have a Miss Kim. I do have a poppy that has budded out. The first bloom fell off and I am waiting for the rest of them to open.

Mr. McGregor's Daughter said…
Lily of the Valley became a thug in my garden by crowding out the Jack-in-the-Pulpits I planted. They also prevented me from planting anything else near them. I now keep them confined to two sunken containers.
I wasn't aware of the tradition of wearing a red or white boutonniere for Mother's Day. That's such a nice thing.
Sat May 09, 08:56:00 PM 2009

Morning Glories in Round Rock said…
Oh, so lovely! I am getting my Lilac fix visiting all the beautiful blogs. Gardenias are blooming in my garden for Mother's Day.
Sat May 09, 09:17:00 PM 2009

garden girl said…
So pretty Carol. I planted a snowball viburnum at my last house - such a nostalgic shrub!

Kat Wolfdancer said…
My Fragrant Snowball Viburnum is at last for the first time since I planted it 4 years ago, in full bloom.. the Variegated Flame Azalea is in high fashion bloom, my apple trees are flaunting their tresses most provocatively! and my wee small Japanese maples are still in flower with their bright red danglies!

healingmagichands said…
My lilac is all done. I have no idea what kind it is as it was a passalong plant from my mother who acquired it from an old house site on her property. It doesn't seem to be troubled by mildew at all, and I love it.

What is blooming here right now is irises galore, plus dames rocket and dianthus as well. I have one of those snowball viburnums going right now, also the ninebark is blooming.

It is hard to believe such beautiful and fragrant plants as lily of the valley and violets can become such thugs. It would be interesting to put them together someplace and see who won the contest. I had lilies of the valley in my border along the north side of the house, but they got moved somewhere else where there was no competition when they started KILLING my hostas. They just don't like to share, I guess.

Commonweeder said…
Not much in bloom here at the End of the Road. It will be another few days before the lilacs bloom. The old syringa vulgaris was here when we arrived along with a beautiful tall tall white lilac. I've added the Beauty of Moscow, Miss Willmott,and Ludwig Spaeth. Miss Canada will come along a little later. We've got room for lots more!
Sun May 10, 04:44:00 PM 2009

Frances said…
Hi Carol, the great minds have a way of being one....

The flower in our zone that is always blooming on Mother's Day is the herbaceous peony. Not really good for lapels, but wonderful as a cut flower. And in defense of S. vulgaris, that is the one that does best in our hot humid summers and not so long winters. I have seen Miss Kim for sale here, but it is so small and the flowers seem different from the old stand by. I must admit that our lilac is behind the shed so whatever happens to it after bloom is not an issue. I wish we could grow some of the other named varieties, like Beauty of Moscow. A very happy day to your beloved mother. :-)

Annie in Austin said…
Thanks for sharing three favorite old-fashioned flowers with us, Carol - miss all three down here!

Miss Kim is quite a tidy and attractive landscape lilac, but Frances is right - can't beat a fragrant vulgaris or one of its hybrids, even if the shrub looks awkward. You're not supposed to get a chill smelling the lilacs...don't you remember your Mrs Greenthumbs? Her method was to prune the shrubs at the right time by cutting lots and lots of bouquets to enjoy inside the house.

acorn said…
The flowers that I associate with Mother's Day - or at least my favorite part of my grandmother's garden - is a wild patch of yellow primroses, common purple violets and lily of the valley. I haven't been able to get it quite right in my garden but I keep trying.
Mon May 11, 08:35:00 AM 2009

gardenretreat said…
I loved lilacs and was always afraid to get them because of mildew problem..thanks for the direction on the lilacs that won't have that problem..
Mon May 11, 02:13:00 PM 2009

Shawn Ann said…
Hi I am new to your blog, and just love your garden photos!
I have a Lilac that looks much like yours pictured here...I really don't know what kind though. But it is not blooming this year. I think it gets too much shade. You seem to know a bit about them, so I thought I would ask your opinion on if I should move it now or when dormant? What do you think?
Fri May 15, 01:49:00 PM 2009