Mystery Of The Broken Walnut Shells At May Dreams Gardens 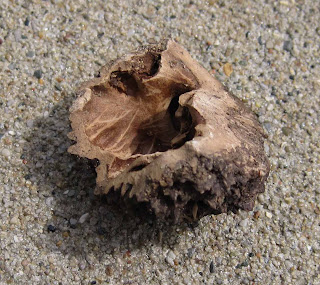 Is it a welcome calling card or a sinister warning?

Several times this week, when I went out to get the morning paper, I noticed the broken shells of a single black walnut on my driveway.

Each time I saw those pieces of walnut shells, I picked them up and tossed them in the trash. Had it happened once, or even twice, I would have just thought it was some squirrels passing through.

But it has happened four times this week and it is always just one walnut, so now I’m spending more time considering what it means, if it means anything at all.

I’ve noticed very few squirrels in my yard in the past. My lot was carved out of a giant field on the edge of the Big City, and thus was nearly treeless when I moved here. I say nearly treeless because there was a giant sycamore tree on the lot, but I decided it was too far gone and had it cut down before the house was built. It took them three days and cost me a small fortune to have it removed.

Wait, I’m starting to figure out what might be going on here. Perhaps that giant sycamore tree was a gathering place for squirrels, a mecca of sorts? What if they are all returning, now that I have a few trees for them to frolic in? And when they see that the giant sycamore tree is gone, they are leaving the walnut shells as a warning of some kind?

Where are they getting those walnuts from anyway? There are no walnut trees around here, as in none within at least 500 feet of my house. There could be some in the woods behind the people across the street, I suppose, but I think it would be a long way for a squirrel to carry something like a walnut all the way from those woods to the top of my driveway.

And why my driveway?

I would never plant a black walnut tree, Juglans nigra, in my garden. They are far too big of a tree for a suburban lot and are messy with all the walnut husks and shells, not to mention actual walnut nuts that attract squirrels.

And if the mess isn’t enough to keep a sane gardener from planting one, the fact that walnut trees secrete a compound called juglone from their roots that inhibits the growth of other plants around them, including and especially tomatoes, ought to be enough reason not to plant them in a small yard or garden.

But I digress. I need to remain watchful to solve the mystery of these broken walnut shells appearing on my driveway. I need to look for more clues, more signs. I need to find out… sinister warning or welcome calling card?
humor trees