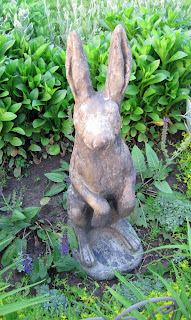 Every gardener discovers upon planting a vegetable garden that they are unwittingly forced into battle for sovereignty over that very garden, for control, for first rights to the harvest. They must protect their beans.

The enemy? Take your pick. Raccoons, birds, woodchucks, deer, a variety of insects, and, of course, rabbits, to name a few. Though we gardeners walk upright, presumably are smarter, and have opposable thumbs, our victory is not guaranteed. The enemy has both small size and instinct on their side, and at least the raccoons have thumbs, though not opposable thumbs like ours.

We may not have to battle all of these enemies at once, but over time, we will face one or more and be tested beyond our wildest imaginations. We have to learn to protect our beans, by any means necessary.

In my own garden, my most epic battles, my greatest tests, have been against the rabbits. I have many stories to share of battles past and present, of what has worked and what has failed, leaving me empty-handed in my own bean patch.

Fencing? There’s nothing more disheartening than to walk out to your garden, surrounded by a fence, and find a rabbit or two inside the fence, oblivious to your presence, calmly eating the last of a long row of green bean plants. I've used a variety of fencing techniques, and none has been impenetrable. Somehow, a rabbit or two figures out how to get under, over, or through the fence. I don't trust fences.

Smelly stuff? I’ve used blood meal and cayenne pepper on some individual plants to keep the rabbits from eating them. I’ve never tried a commercially prepared product because the thought of the smell of “putrid egg solids” or whatever the spray is made of, makes me gag, and besides, I don’t want to attract the attention of neighbors who perhaps already wonder what I’m doing in my garden behind the privacy fence. Anyway, these concoctions seem to work for awhile, but must be reapplied frequently, especially after it rains. I gave up on them because I can’t always be in the garden right after the rain.

Trapping? I am a poor trapper at best. For whatever reason, I have only occasionally been able to set a trap that a rabbit fell for and got caught in. The few I did catch, I took to a park about two miles away and released them, but I felt guilty about doing so. Then a few years ago, I caught a big rabbit, in the rain, and when I picked up the trap to take it to the park, the rabbit shot out of it like a cannonball out of a cannon because I had not locked down the trap door. I no longer wish to be caught standing in the rain, holding an umbrella in one hand and an empty trap in the other.

Scare tactics? I have a plastic owl mounted on a stick in the garden. Owls are supposedly a natural predator of rabbits, so the assumption is that my plastic owl will scare them away. It does no such thing, but I put it out every year, just in case a really dumb rabbit shows up. Ditto snakes. I've never seen a real snake in my garden, ever, but I have cut up old garden hoses and left sections of them in the garden as fake snakes, thinking that might scare the rabbits. It did not, so I don't do that anymore. Those rabbits are training me quite well.

A fortress? I got the idea last year to build a small fortress around the bean plants using plastic spoons. It seemed to work, though I will be the first to admit that it looked odd and whenever anyone saw it, I had to explain what I was doing. Before anyone copies this technique, please be aware that I lack actual scientific proof that it kept the rabbits away. I never saw a rabbit mosey up to the row of spoons and then leave, and without this evidence, I am hesitant to recommend this method to others, though I may try it again. But next time I will use forks.

This year's battle against the rabbits may be the most trying of all. All is quiet and I see very little evidence of rabbits eating in my garden. I have yet to even see a rabbit anywhere. I keep asking myself why? Where are they? Are they still here? If they aren’t here, what happened to them? If they are here, what are they doing, where are they eating?

Clearly, the rabbits appear to be using stealth techniques.

After considering all my past successes, and failures, I decided to at least cover the young green bean plants with row cover, for another week or so. And once I remove the row cover, yes, I might set up a perimeter defense with plastic forks.

The green bean patch in my garden. All the beans are up! 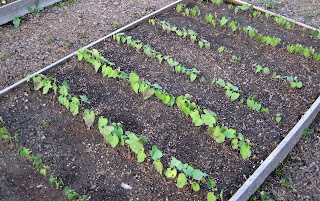 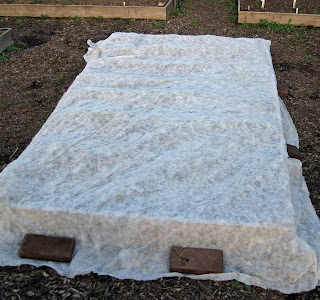 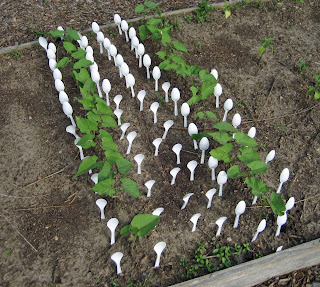 Rose said…
Definitely go with the forks, Carol--they've been my fortress against the outdoor cats who think my planters are litter boxes:)

Patsy Bell said…
I think they know when we are leaving. My sister said they see us pack the car. Tonight a pair of bunnies and a pair of squirrels were out for a stroll in the garden. Whoa is us.
Tue May 26, 11:56:00 PM 2009

Angie @ Many Little Blessings said…
The rabbits have been out like crazy in our garden this year! They are eating all kinds of things -- including totally eating our beans and peas. We put fencing around the lettuce, but they have gotten in anyway. Last year, I did lettuce in pots and put it up on our picnic table, and that worked out really well.

Yolanda Elizabet Heuzen said…
There are no rabbits in my potager I'm happy to say but before you get envious I have snails and slugs, zillions of them. Not of the good.

Karl Katzke said…
I have two lines of defense. One has teeth. The other is a completely enclosed garden on all six sides.

Anonymous said…
No rabbits here thanks to two hungry garden felines but since said pets will use any available space to leave unwelcome gifts, I've been placing chicken wire over the veggie area. Seems to be working. Now I've got to figure out how to cover my load of compost. I love my cats but they can be irritating.
Wed May 27, 01:44:00 AM 2009

Carol Michel said…
All, thanks for the ideas and encouragement. I added another technique to the post... scare tactics, though they aren't working very well. Or are they? Where are those rabbits? If I can no longer see the enemy, is it still an enemy??

Lisa at Greenbow said…
Don't let those houdini rabbits let you think they aren't around. Just when you let your guard down they will be back.
Wed May 27, 07:07:00 AM 2009

Gail said…
General..."The perimeter looks secure for now!" For now, being the operative word around gardens! The enemy is clever and often works at night or at dawn while we are sleeping or having coffee. Good luck! gail
Wed May 27, 08:22:00 AM 2009

Anonymous said…
What worked for us against the deer, and should work for you as well.... we went to Home Depot and purchased PVC piping in the plumbing section, arched it over the raised beds, and covered it with plastic netting.... so basically, a row cover, that stands 4 feet high - should be good enough for beans, although my onions are sticking their heads out and the snow peas need to be trained not to touch it.

Last year I battled slugs. I went out just about EVERY morning and some evenings and either drowned them or squished them - ewwwww. This year there is narry a slug in my potager.

Matron said…
I'll try anything to protect my precious veggies from pests. slugs, pigeons and cabbage white butterflies are bad... but the neighbourhood cats are the worst! They just dig up any soil and destroy any seedlings or seeds. Grrrr
Wed May 27, 01:18:00 PM 2009

Weeping Sore said…
Rabbits are my arch-nemesis in the public veggie garden where I volunteer. Last week, I removed the row covers over the beans, assuming they were too big to interest the bunnies. This week, the beans were all completely gone. Likewise, three eggplants about 18" tall - chewed to small stumps.
I'm thinking land mines....
Wed May 27, 02:32:00 PM 2009

Anonymous said…
Hmmm, thanks for the warnings. I've seen rabbits a couple of times since one was living under my back steps, but have been complacent since our veggies are fenced in so nicely. I'll beware instead! And I love the spoon idea, and will try forks once my bean plants come up. We use spoons as markers, so our garden already looks strange, like we are trying to grow spoon bushes. May as well grown fork trees too!
Wed May 27, 08:23:00 PM 2009

cindy scott day said…
My soda bottle cloches seem to be my best defense against rabbits. I have a large nest of baby rabbits in my garden at present, and haven't had the heart to evict them. (Why are they so cute? It has to be their best defense.) Clearly my fence did not keep them out. Actually, I think I probably built the fence around them and their mother must have found a way in and out.

I use deer netting for a fence, burying the bottom edge. I think the plastic spoons & forks might be a good way to secure the netting further. At the very least, I'll be able to tell when security has been breached.
Thu May 28, 08:25:00 AM 2009

Anonymous said…
I used the spoon / fork / skewer technique last year. To say it mildly, it was an utter disaster. I even saw the rabbits laughing at me.
This year I gave up and am not growing beans :)
Oh the joys of not growing beans!
Thu May 28, 11:16:00 AM 2009

apt said…
I just Googled "gardening and blogspot" and got here first. Hi. I wanted to share we thought "fencing! fencing will keep the rabbits out of our strawberry patch." It worked last year. Last month I went to weed out the patch and found, within the fencing, a rabbit nest.
Looking forward to reading more here. I think this was just what I was looking for!
Thu May 28, 08:11:00 PM 2009