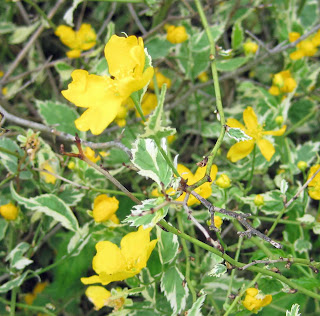 What gardener would prune a shrub right at its peak bloom time?

We all know the rules!

But then there is the other rule, prune dead wood any time.

And my Kerria, Kerria japonica 'Variegata', was so full of dead wood that I decided, even though there were live branches blooming, that it should be pruned back today. 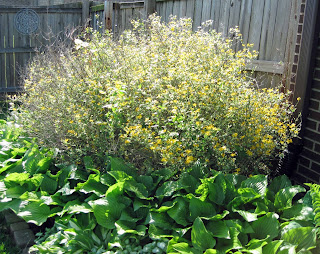 Yes, I could have patiently trimmed out the dead wood, leaving the live branches, and I probably should have trimmed it back a month ago. But Kerria is one of those shrubs that grows right back better than ever whenever it is pruned back to the ground.

So that's what I did today. I cut it wayyyyy back and in the process created an enormous pile of trimmings. 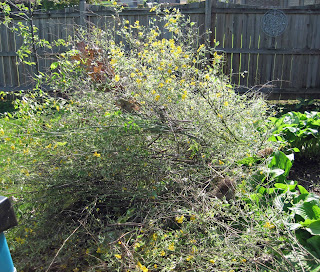 In the "old days", before I had a chipper shredder, I would have cut that pile of trimmings into little pieces and stuffed them in trash bags because it would have overwhelmed my compost bins and taken forever to compost. I didn't like doing that, but really had few other options here in suburbia.

But these aren't the old days, these are the days of my new electric chipper with the handy bin that everything chips into. 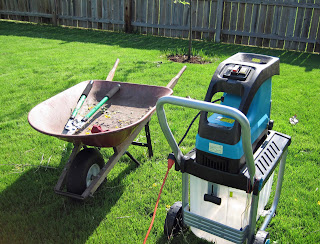 Guess how long it took me to chip up all the Kerria trimmings? You will be amazed when you find out the answer!

That big pile of trimmings was reduced to just the one wheelbarrow full of "stuff" that will compost in no time, especially if I put it in my compost tumbler. 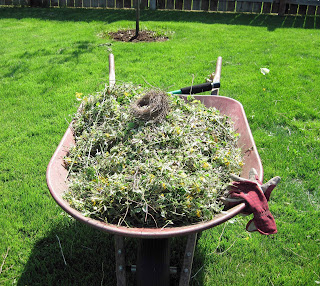 That's a bird nest on top. I found it in the middle of the shrub. It was empty, probably built and used last year. That's another good thing about Kerria and other larger shrubs, they provide great cover for birds.

Anyway, guess how many times the chipper clogged up?

Do you know what else is nice about it? You know how with some chipper shredders how it seems like the branches have to be forced in a bit, and then zoom, the chipper decides to grab it and it is jerked from your hand? It's rather jarring when that happens.

Well, this chipper never does that. It just calmly takes in all those branches and chips them up into little pieces.

After I finished pruning and chipping everything, my Kerria looks a bit... smaller... flatter, with far fewer blooms. 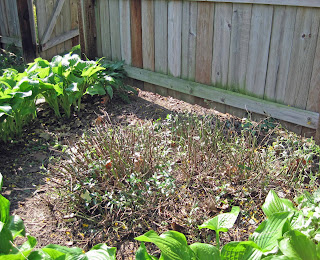 But I promise it will come back. I've trimmed it like this before, and it came back better than ever.

(If you would like to learn more about Kerria, please visit Margaret at A Way To Garden. She wrote about Kerria today, posting about the time time I was trimming mine back.)

Finally, for those who might find that last picture of the Kerria pruned down to the ground to be rather stark, here's a picture to cleanse your mind. It's a yellow iris blooming in my sister's garden. 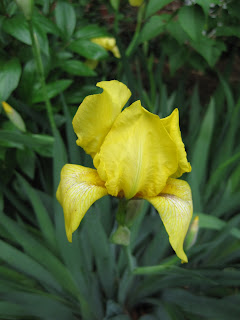 I keep meaning to steal dig up some of these for my own garden.

So, did you guess how long it took me to chip up those trimmings?

23 minutes, and I stopped once to take a quick phone call.

I love this chipper all over again every time I use it and once again thank the people at World's Best Electric Wood Chipper for sending it to me to try out.

Can you believe that... 23 minutes! And I swear I wasn't trying to hurry!
reviews shrubs