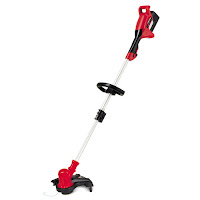 You have to give credit to Troy-Bilt® for their willingness to send products out to people like me to use and review, no strings attached.

Like several other garden bloggers, I also got a TB57 Lithium Ion Battery Cordless String Trimmer / Weed Trimmer from them earlier this spring.

One fine Sunday afternoon, not too long ago, I went out to the garage to put it together. It took me about twenty minutes, and most of that time I was messing around getting the handle attached. That takes four screws, and they are kind of odd screws, not really meant for a Phillips or slotted screwdriver, I think, though I’m not sure. The other problem, mostly my own, I’ll admit, was the print on the instructions was kind of small and I tried to read them without my glasses. I think that all instructions should be large-print regardless.

Once I put the trimmer together and charged up the battery, I gave it a test run and well, um, let me get to the point… I didn’t like it, at least for me. Here were my issues:

- I like to use string trimmers for edging along the driveway and sidewalk, and this one is not made for that. (Edging is different from trimming; with edging you run the trimmer at a right angle to the drive or sidewalk versus trimming, when you keep the trimmer flat to the ground.)
- I had trouble holding down the on/off trigger and if you let up on it a bit, the trimmer doesn’t stop, like with a corded electric trimmer, it just slows down.
- I started to get an ache in my upper arm and neck, probably due to the weight of the battery and how I was holding the trimmer.

So, I put the trimmer back in the garage and thought about what I might write about it.

Then it occurred to me that maybe my nephew, who is a new homeowner, might like a new string trimmer!

He would indeed, and so I give it to him to try out. I showed him the basics of how to use it, even though he used to work at a golf course and has a lot of experience with trimmers. In doing so, I used my middle two fingers to hold down the trigger, and that seemed to work better. Then I proceeded to use it to demonstrate how it trims and maybe I was holding it differently, because it didn’t seem that bad. Then I started to think maybe it wasn’t such a bad trimmer after all, and should I really give it up so quickly?

But I did give it up and my nephew has used it and reports that it is a pretty good trimmer.

- He likes it better than a gas powered trimmer because when you let go of the trigger the string stops right away.
- It does slow down as the battery runs low, but that is to be expected.
- He thinks it is almost big enough to have a shoulder strap, like some of the bigger gas powered trimmers, and that might make it easier to hold
- He would like it to be just a few inches longer when fully extended. He’s an even six feet tall.

But it works well for him, and he’s going to keep it.

As for me, I had a basic Troy-Bilt® corded electric string trimmer that I loved and used for several years, but they don’t last forever and late last fall, it had one too many parts go kaput, so I bought a new one this spring. Guess what I bought?
reviews