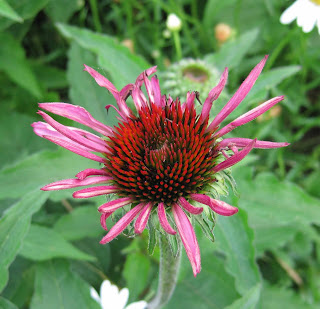 My careful observation of gardeners has shown me that there are times when they look a little bit goofy. (Goofy like this coneflower that looks like it just opened up and forgot to comb its petals out nice and neat.)

For example, I have noticed that a gardener might be standing there holding a hose and watering a plant when she sees something pretty out of the corner of her eye, maybe a new bloom. She turns to look to see what it is and the next thing she knows, she has just watered her shoes and her legs and is soaked from the knees down. That's goofy, isn't it?

Or maybe the gardener is startled by something slithering nearby or flying just a little too close while she is standing there watering. She lets out a tiny nearly inaudible yelp while simultaneously dropping the hose. The hose naturally lands with the hose spraying water straight up on to the gardener, soaking her as she valiantly tries to simultaneously grab it and keep track of whatever it was that startled her in the first place. The very act of “valiantly trying to grab the hose sprayer” is usually accompanied by an awkward assortment of goofy movements on the part of the gardener, a special “gardener’s dance”, of sorts.

And what must the neighbors think when they see their gardening neighbor next door running as fast as she can across the yard, waving a hoe above her head in an effort to scare away rabbits. “How goofy,”, they might think, “what does she think she’ll do with that rabbit if she actually catches it?”

No, you may not have the phone number for my neighbors to ask them what they think.

I have also observed gardeners in public, all cleaned up, so to speak, except for that little tell-tale grass stain on the knees of their pants, or maybe a little leaf stuck in their hair. And they have mud on their shoes. Or even more goofy, they have mud on their gardening shoes, which they inadvertently slipped on as they hurried out the door. But they weren’t in such a big rush that they didn’t have time to stop and kneel down and pull that one weed, which explains the grass stained knee. No telling how they got that leaf stuck in their hair.

And though I have used “she” or “they” in these examples, I think men have their goofy moments in the garden, too.

Case in point, have you ever observed a gardener reaching to trim something just out of reach, thinking that if he stretches just another inch or so, he’ll be able to reach it? But instead, he loses his footing and lunges forward directly into the shrub he was trimming, only to bounce right out of it, quickly looking to the left and right while saying to no one in particular, “I meant to do that”. Yes, we are sure you did.

There are other examples of a gardener looking a bit goofy, even foolish. There is the foolish and wild flaying around while trying to shoo away a bug that has long since passed by. And the frantic smacking of arms and legs to knock off a spider that turns out to be just a piece of a dried up leaf.

And what about gardeners who get caught alone in their gardens talking to their plants? Goofy.

We should all admit it. These wild, unexplained movements, looking a bit unkempt at times, and talking to the plants when we think no one is looking do make us look goofy. It can’t be helped. It is all part of being gardeners, no matter how dignified we think we are.

We should just embrace looking goofy, at least in the garden, for a happier life.
embrace humor