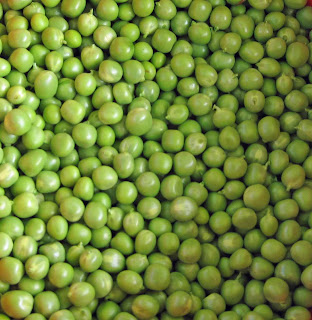 These letters are sure making me look at my garden differently this year, knowing that I am going to write each week to let you know how it is growing. As a result, I'm doing stuff I might otherwise have procrastinated on or maybe even skipped this year, like mulching the paths.

Yes, yesterday, I finally mulched the paths between the raised beds in my vegetable garden. I was getting tired of telling you two and everyone else to not look at the paths in my weekly picture. Plus I thought they looked bad, too.

I had a nice window of opportunity (WOO) for it, with the high temperature predicted to be in the mid-70’s, which is very comfortable to work in. It took three cubic yards of mulch and most of the day to do all the paths. I buy this particular mulch a truckload at a time, bring it home, unload it, spread it around, rest a bit, then go back for the next load. Fortunately, no one at the mulch store cares much about how you look which was good because as the day wore on, I looked like, well, like someone who had been spreading mulch all day long. They are very friendly there and on the third load, the guy gave me an extra big scoop of it.

Then this morning I went out to harvest what I could find, and I found quite a bit. 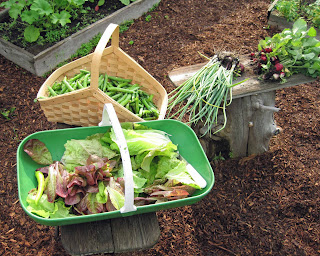 That’s probably the last of the lettuce, radishes, and green onions. Any onions left in the garden now I’ll let grow on for fall harvest.

Not included in the picture are a few strawberries I picked later. They are probably the last berries of the season, too, but I’m not complaining because my little patch provided me with a lot of strawberries this year. Several people have asked me what variety I grow, but I can’t remember. I’ll have to hunt for the plant tag or the receipt. I do know I mail ordered them.

I’m particularly proud of my peas. I know I’m always saying something is my “best crop ever”, but this really is my best pea crop ever. I attribute it to the rain and cool weather we’ve had so far this spring. That mess of peas I picked this morning ended up being eight cups worth after I shelled them. And there are more peas to pick later this week.

Elsewhere in the garden, the squash plants are getting bigger and the corn is growing taller. We used to always say corn should be “knee high by the fourth of July”, but mine is knee high now and always is by this time. If it really waited until July 4th to get to just knee high height, I'd consider it a big problem and would wonder what was wrong.

The tomatoes, green beans and peppers are growing nicely, too, and I’m seeing a few blooms on them. Which reminds me, I need to get out there and plant some more green beans where I’ve pulled out the lettuce. And I want to try to grow lettuce this summer to see if I can at least get enough thinnings to make it worthwhile.

P.S. Oops, I almost forgot, here’s a picture of the garden today. 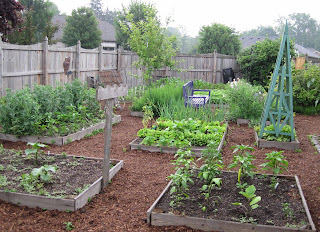 I took it in the rain earlier in the afternoon. I didn’t think we had rain in the forecast, but it rained anyway, then the sun came out again. That delayed me getting back out to the garden to weed after I mowed the lawn. So for now, ignore the weeds. Look at the paths! How pretty with the new mulch!

I promise I’m probably outside right now as you read this letter, pulling those doggone weeds.

P.S.S. Don’t forget that tomorrow is Garden Bloggers’ Bloom Day! I’m still holding out for a squash blossom to show up for it.