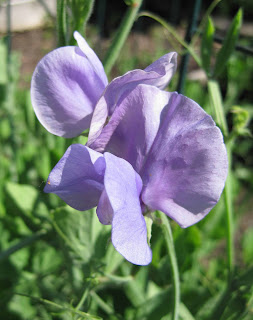 Greetings from my vegetable garden where the spinach has bolted but the lettuce is still good. It was great to spend time with both of you and so many other garden bloggers at the Chicago Spring Fling last weekend. I’m looking forward already to gathering with everyone in Buffalo in 2010!

While I was gone those four days, the weeds especially grew like, well, weeds, and as mentioned, the spinach bolted for the season. Yesterday and today, I spent time weeding, hoeing and harvesting in the vegetable garden to the point that I think I have it back under control. Well, under control except for the paths, which I desperately need to add mulch to. I hope to take care of that next weekend.

But the weedy paths aren’t keeping the garden from producing a good early spring harvest. Here's a picture of what I picked this morning. 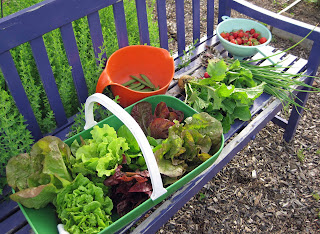 I’ve been picking strawberries all week, and also enjoying lots of lettuce. Pretty soon, as in maybe tomorrow or Tuesday, the peas will be ready to pick!

In the rest of the garden, the “summer” crops are taking hold and growing quickly.

There were some seeds that didn’t come up very well, including lima beans, which I’m growing for the first time to see if I like them fresh from the garden. I know I don’t like them canned! Only one plant came up in the four foot row. 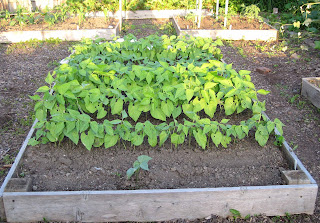 The rest of the green beans came up just fine, so it couldn’t be me, could it? I guess I’ll just let this one lima bean plant grow so I can see if I like them, and then if I do, I’ll try harder next year to grow a whole row of them.

I also had one variety of squash, ‘Horn of Plenty’, that didn’t seem to come up with the rest of the squash varieties, so I re-planted those a week or so ago. Then this morning I decided that the second sowing wasn’t going to come up either, so I dug up that spot to replant with another squash variety entirely and discovered too late that the seeds were germinating. Probably in another day or so, I would have seen the first seed leaves. Dang. It’s too late for them now, so there will be no ‘Horn of Plenty’ in the garden this season, just some extra ‘Cocozelle’, which is the variety I planted today.

But I’m happy with how everything else looks, for the most part. I’ve started suckering the tomatoes and in another week or so, I’ll probably be tying them up. My peppers still looking kind of sad, so I side dressed them and most everything else in the garden this morning with a bit of organic fertilizer that I bought when I ordered the red wigglers for the worm farm, to take advantage of some special offer. Hopefully, with some rain expected in the next few days, that will help get them out of their funk.

Dee, I hope that you made it home safely from your travels. I’m sure your first stop will be to see how your gardens have grown while you were away. And Mary Ann, good luck with the ‘Cue Ball’ squash. It's my favorite squash to grow!

Until next week, when I hope to be gloating over my peas, “flowers and veggies for all”,

P.S. I’m also growing flowers in my vegetable garden, including zinnias, sunflowers and marigolds. I thinned the seedlings out yesterday. A lot of gardeners are squeamish about thinning out extra seedlings, and as a result, none of the seedlings do well because they are all too crowded together. Everyone needs to get over that and thin out their seedlings. Plants need room to grow!

P.S.S. The flower above is one of the sweet peas I planted on March 17th. They are just starting to bloom and match my purple bench perfectly. Sure, I’ll say I planned it that way since it came out like that!

Finally, here’s a picture of the garden taken a few hours ago. 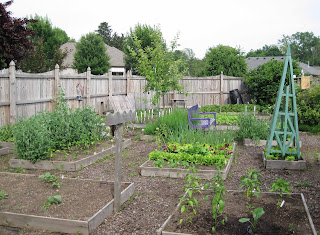 Please disregard the weeds in the paths.
letters to gardening friends