Random Observations and Thoughts While Mowing 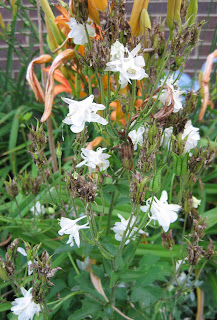 Earlier today, I read that at any given time there are 10 quintillion insects on this earth. Written out that number is 10,000,000,000,000,000,000. That's eighteen zeros after the ten. I don't know if that is an accurate number or one that has just propogated itself across the internet and therefore seems true because you see it on several web sites.

But if it is true, it's a lot. I wonder how many of those insects are in my garden? Or your garden?

If you combine my share of those insects with all the weeds I've got growing, which might number close to one quintillion on their own, it's a wonder that I have any garden at all!

But I observed that I do have a garden, more or less, and several flowers caught my eye as I walked back and forth with the mower this evening.

First up, I noticed this Columbine (Aquilegia sp.) which has mysteriously rebloomed with these ghostly white flowers. The first blooms earlier this spring were more bluish in color and I've left their seedheads to mature on the plant because I don't mind if these self-sow a bit in the garden. I'll have to watch to see if these white flowers, these ghosts of springs past, form seedheads, too.

In another part of the garden, these Stachys monieri 'Hummelo' are blooming as good as they've ever bloomed in the three years I've had them. 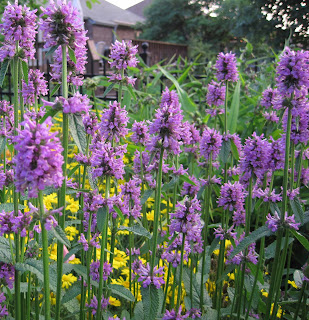 They are a perfect example of how perennials seem to "sleep, creap, leap". I remember when I bought these in a one gallon container how disgusted I was with how rootbound they were. I could have kicked myself for not checking for that more closely before I left the garden center with them.

But I used a serrated knife to whack carefully divide the plant into three divisions, and planted those divisions out on a hot June day, which is not a good time to plant perennials around here. They looked terrible that first year, but I watered them when I remembered to and hoped for the best. Then last year they looked pretty decent, but this year they look great. It's either my talent as a gardener that's got them to this point or all the rain we've had this spring.

I'm guessing it is more due to all the rain we've had this spring and not any talent I have as a gardener.

Not far from where the Stachys is blooming, these daylilies are putting on their annual show, providing evidence that I don't do well at making sure my flowers match each other. 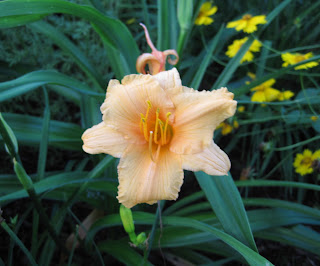 This particular daylily is 'Apricot Sparkles' but the color this evening reminded me of those Orange Pushups that we used to beg to buy from the ice cream truck when it came through our neighborhood "back in the day", blaring its siren song.

For a brief moment I contemplated getting some Orange Pushups at the store but decided that they probably wouldn't taste as good to me now as they did when I was eight or nine years old. Some foods are just better left in the past.

I just hope after all this reminiscining, I can remember to call this daylily 'Apricot Sparkles' and not 'Orange Pushups'.

But forget about those daylilies for just a minute, and look at this hot pink coneflower. It's blooming amongst some other coneflowers, which now look dull and lifeless to me compared to this one. 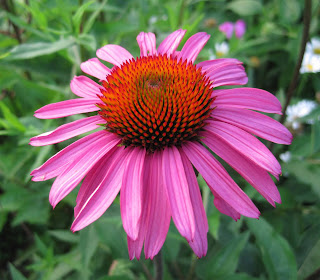 I got very excited when I saw this because I didn't remember planting any "special" coneflowers. So I thought this one just showed up like this, giving me the opportunity to name it something like 'Dang That Is Pink'. But I found the tag, and it looks like it has a registered trademark name of Echinacea purpurea 'Primadonna® Deep Rose' so I'd better not confuse myself by naming it 'Orange Pushups' or 'Dang That Is Pink'.

Finally, back in the vegetable garden, I noticed that the zinnias I started from seed on May 15th have flower buds forming now. They also have some tell-tale holes in the leaves that look exactly like what it looks like when Japanese beetles eat them. I haven't seen one of those beetles yet, but I know that's what is eating those leaves. Those Japanese beetles show up every year right about now, all 10 quintillion of them, give or take.

Time to get a bucket of soapy water and see if I can pick off at least a few quintillion Japanese beetles, right after I pull out a quintillion weeds.
flowers gardening insects