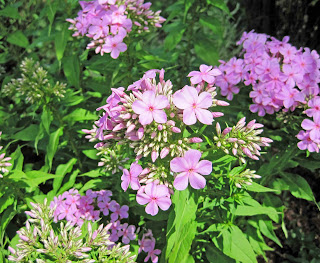 If I was in charge, I would have made sure these pink Phlox paniculata bloomed on July 15th and not today, so I could have included them in my bloom day post.

Well, actually, if we are going to be sticklers about it, this phlox really needed to bloom on the 14th because that's when I take my bloom day pictures. I like to post early on the 15th and pictures of the garden taken at midnight on the 15th don't generally turn out all that good.

Many thanks to all who participated and shared their blooms with everyone yesterday. That was fun. Let's do it again on August 15th!

If I was in charge, I would also not let this flower go by the common name Candy Lily. 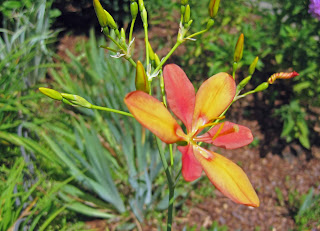 It's botanical name is x Pardancanda norrisii. That "x" in the front of the name means it is a hybrid developed by crossing two different genera instead of two species within the same genus. In this case, these resulted from a cross between Pardanthopsis dichotoma and Belamcanda chinensis. To further confuse matters, this flower is from a seedling from the original plants that I started from seed purchased years ago, so it is likely not really even Candy Lily any more because most hybrids will not produce seed that is true to type, anyway. (Although maybe when you cross two different genera, they do? Hmmm, something to look into...)

But that's not why I would not call this flower Candy Lily if I was in charge. I wouldn't call it Candy Lily because it is no lily, it is from the Iris famlily! It should be Candy Iris!

Now, at this point, I'm tempted to start up a long explanation about the Lily family, Liliaceae, and the Iris family, Iridaceae, but it is such a pretty day, I won't. Unless, of course, someone comments that they'd really like me to. Just let me know.

While I am pretending to be in charge in my garden, here's what else I would make happen:

- All the weeds in my garden would be small and easy to pull and there would be just a few so as to give me the pleasure of pulling them every once in a while, but they would never take over!

- The green beans would ripen just a serving or two at a time so I could pick them as I wanted to cook them for dinner, and not have them all ripen at once so that I have five pounds of green beans in my refrigerator waiting for me to either cook them, give them away, freeze them, or do something with them.

- My tomatoes would not all be green right now. (Enough said about that!)

- Squash would not blow up like balloons just because I didn't check them for a few days. (No further comment.)

Yes, if I was in charge just a few things would be different around here!
flowers