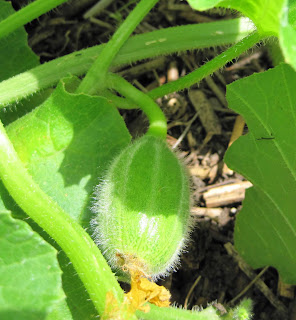 Greetings from my summer garden where I am overrun with green beans, squash and cucumbers. Too much produce is a good problem to have, isn’t it?

I also picked my first two ears of sweet corn on Thursday, an early ripening variety called ‘Spring Treat’ from Botanical Interests. I had one of the ears for a snack right away and can report it was delicious and sweet.

This is a picture of that harvest from Thursday. 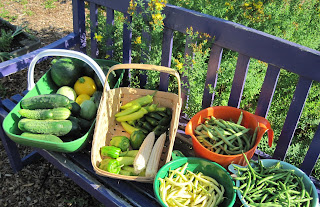 The rest of the sweet corn, a variety called ‘Honey Select’ from Pinetree Garden Seeds is right on schedule to be harvested in early August. It’s tasseling now and I can see the silks of the ears.

I m newbie when it comes to growing sweet corn, since I’ve only been growing it for a few years now. I was brought up believing that you needed a lot of sweet corn to get good pollination, so I had to get over that before I tried it in my garden. But I do fine with my little 4’ x 8’ bed of it. I don’t get bushels of corn, but I get enough to eat fresh sweet corn for a few meals in the summertime, and that’s fine with me. And every year, I get a little better at growing it. This year I’m attempting to keep the raccoons away from my corn by growing a big spaghetti squash vine right in the center of the bed. Supposedly, the raccoons don’t like to walk on the prickly leaves and stems of the squash vines. I’m shocked they could be so finicky, but so far, I’ve not had any raccoons steal my sweet corn, so maybe it does work?

Elsewhere in the garden “Tomato Watch 2009” has begun in earnest. So far, I’ve picked a few handfuls of the cherry-type tomato ‘Gold Nugget’, but none of those even made it into the house. I ate them as snacks while gardening. All the other tomato plants, with the exception of a variety called ‘Aunt Anna’, are loaded with green tomatoes of all shapes and sizes. I have no idea why ‘Aunt Anna’ has no fruit on it. This is the first year I’ve grown this variety and if doesn’t produce any tomatoes, it will also be the last year for it.

I’m watching the tomatoes closely not only to find the first ripe one, but also for signs of tomato hornworms and that very devastating late blight which has decimated tomato crops up and down the east coast and as far west as Ohio this year. I hope it stops at the state line, because we are the next state west after Ohio (for those not familiar with the geography of the Midwest). So far I’ve seen neither hornworms nor late blight, just a few yellow bottom leaves, which is typical of tomato plants and nothing to get too worried about.

Once my tomatoes start ripening, I’ll announce the rules of my annual tomato growing contest. Everyone is welcome to join in! But it could be awhile because it has been fairly cool around here and tomatoes don’t do well when it is too cold. Yesterday’s high temperature was 71F, which set a new record for July 18th for the coldest high temperature. The previous record was 75F set in 1883.

With that bit of weather trivia, I'll end this letter and head out to the garden to see about pulling some weeds that are slowly creeping into my garden paths. Oh, and there are tons more cucumbers to pick.

P.S. Here’s a picture of my garden from earlier today. 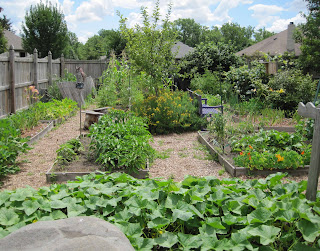 See the weeds daring to grow in the paths?

P.S.S. The first picture above is of one of my baby cantaloupes. That’s another crop I haven’t grown for awhile, but decided to grow to fill in a bed on the edge of the garden that ended up with nothing else planted in it. I’m going to try that trick to set the cataloupes up on small plastic cups when they get a little bigger. It’s supposed to help keep them from rotting on the wet ground and gets them up out of the leaves where they will get more sun and supposedly ripen faster. We’ll see how they turn out!
letters to gardening friends