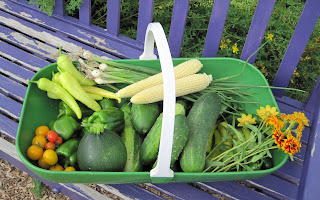 I’ll start right off with a picture of today’s harvest, picked just a few hours ago.

My excuse on the squash that got too big was that it was hiding, as were some of those bigger cucumbers. There are even bigger cucumbers in the compost bin, but don’t tell anyone. I always feel a bit wasteful and lazy when I let cucumbers grow too big and have to toss them to the worms and micro-organisms that live in the compost. I’ll just consider it a contribution to the garden for next year when all that breaks down into good compost for top dressing the garden beds.

Still missing from the picture of my bounty are the first ripe “big” tomatoes, but there are plenty of green ones so I’m sure by next weekend I’ll have a few of those to eat, too. In the meantime, I’ll enjoy the cherry tomatoes, including the first ‘Black Cherry’ which I saw while filming a little video of my garden. I picked it and ate it in one motion. It’s a talent I’ve developed to be able to pick a cherry tomato, wipe it on a clean spot on my shirt and then pop it into my mouth as fast as you can say “tomato hornworm”.

Tomato hornworm? Who said that? Where? Not in my garden, at least as far as I can tell. Usually by now I’ve found some and squished them, but they seem to be missing this year. I won’t complain about that or the lack of Japanese beetles. I’ll just count my blessings and my green tomatoes and keep on weeding when I can.

Speaking of weeding, I think I’ll wrap up the weekend with some more weeding in my garden this evening before the new work week begins. I never seem to get much done in the garden Monday through Friday, do you?

P.S. Here’s the weekly picture of my garden. 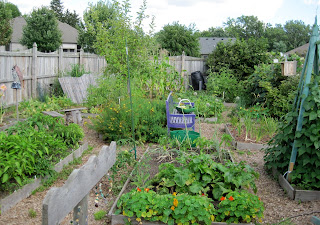 I don’t think it has changed that much from last week, other than some of the plants look a little more worn out and there are a few more weeds in the paths.
letters to gardening friends