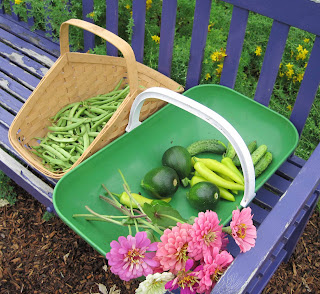 Greetings from my summer garden. At least I think it is summer. It is summer, right? It’s been so cool here this past week that if we didn’t have calendars and someone just blind folded us and brought us here, we might be convinced it was early May or even late April. I joked that it was so cold that maybe we should have turned our calendars back to May instead of forward to July last Wednesday.

And it was a good .78 inches of rain, the kind of rain that lasts all day, gently falling and really soaking into the ground. The kind that every gardener dreams of; the kind that every planner of 4th of July events dreads. Yes, most of the 4th of July celebrations around here had to be postponed to today because of the rain.

Too bad! It’s all about the garden, isn’t it? Yes! It was worth it! Every plant looks happy now. Well, except for a few perennials that I didn’t provide any support for, like Blue Dogbane, that are now lying nearly prostrate on the ground. I’ll have to get out there and try to tie them up somehow if they don’t bounce back on their own. And while I’m out there, I’ll have to pull those weeds that are happy now, too.

But first things first, all other gardening must wait while I tend to the vegetable garden. It waits for no one when produce is ready to be harvested. This morning I picked a mess of green beans, mostly the varieties ‘Provider’ with a few ‘Bountiful’. The other two varieties, ‘Straight N Narrow’ and ‘Goldrush’ aren’t quite ready yet, but I see lots of little beans on the plants.

I’m very happy with this year’s green beans. Not only have the bunnies left them alone, but the plants are big and healthy and there isn’t a spot on the beans from Mexican bean beetles or anything else. What’s my secret? Oh, I have lots of secret ways in the garden, don’t most gardeners? But honestly, I really didn’t do anything special to these beans, so I guess this is just a lucky bean year.

I also picked the first little cucumbers today. I eat them as snacks, though they are the perfect size for pickling, if I had a notion to do some pickling. But I don’t, so I’ll just eat them along with my first little round squash. I picked three of those this morning, too, the variety ‘Eight Ball’, so it's time to figure out what to make with summer squash. I think I’ll start with some zucchini pie, though I’ve also been thinking that these 'Eight Ball' squash would make a great slaw type salad because they are firmer than most summer squash varieties and would hold up well to grating. Does anyone have any recipes?

And with that, I’ll end with…

Flowers and veggies to all,
Carol

P.S. Did you see that earlier this week my night blooming cereus bloomed? That’s the earliest it has ever bloomed for me. I also picked a tomato on June 30th, from the plant I bought with blooms on it, so I refuse to count it as the first tomato of the season. It was an ‘Early Girl’, and tasted just “so-so”. I’ve bought better at the grocery store, sad to say. But my early sweet corn is tasseling so I should have some fresh sweet corn from my garden very soon, probably earlier than I’ve ever picked any. Here's a picture of the garden taken a few hours ago. 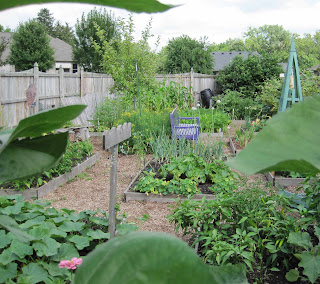 Those big leaves around the edges are the sunflowers, which are now taller than me.


P.S.S. Dee, I promise that my next post will be about my trip to the nearby daylily garden and all the daylilies I bought. Here’s a picture of one of them, ‘Prince of Purple’ as a little teaser until I can post about it. There is much to report! 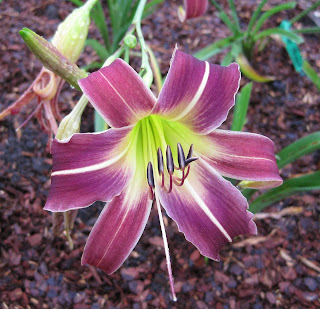 Chloe m said…
As far as recipes go for squash, I have some mighty fine ones I will be posting soon. They are not originals, just some delish ones from Country Living and Sunset, a great source for yummy recipes.
Your garden looks LUSH.
Rosey
Mon Jul 06, 08:26:00 AM 2009

healingmagichands said…
I am jealous of your rain also. We only got a quarter of an inch a couple of days ago and yesterday a paltry tenth. Better than nothing.

I guess I could be considered a purist, but I like my zucchini steamed with some tarragon and served witha splash of olive oil.

We also find them quite wonderful grilled. We cut them lengthwise into "steaks" about a quarter of an inch thick. Toss them in olive oil with garlic powder and some oregano. Get a fire going in the barbeque and grill them until they are nicely browned on both sides. We use a special perforated flat steel plate over the grill so the squash does not slide through the grill wires. As far as we are concerned, it just doens't get any better than this, and this is also how we prep the summer squash for winter use. After it is grilled, we spread it on a cookie sheet and freeze it that way. The squash keeps very well this way and you can use it sliced up in salads or reheated in the oven or sliced and tossed with alfredo sauce in your winter pasta.
Mon Jul 06, 01:24:00 PM 2009

Dee/reddirtramblings said…
Hi Carol, you are such a tease. We had rain on the 4th too which was a big surprise. Oklahoma never ever gets rain then. I like my zucchini fried like my Grandma Nita used to do. I also like it in my spaghetti sauce. Speaking of, I'm going out in the garden in a bit to see if my zuke has grown large enough to toss in the sauce.