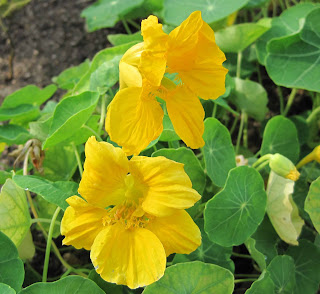 I’m not sure how a few pictures of nasturtium growing in the vegetable garden and the idea to write a simple post about how easy this plant is to grow turned into a botanical jumble that took me through two plant families, but it did.

But I believe I have it all sorted it out now, starting with my nasturtiums which are actually Tropaeolum majus. They are in the Tropaeolaceae plant family, which includes just one genus and five species. Or maybe two genera and 92 species. Or three genera and 80 species. My sources do not agree.

Regardless, whether it is one, two, or three genera, it is a relatively small plant family and I will admit I had not heard of it, or remembered it, before today.

To further complicate matters, most people, me included, regularly use the common name “nasturtium” for T. majus even though “nasturtium” is also the Genus name for watercress, Nasturtium officinale. In fact, if you search for seeds for "little n" nasturtium using the genus name Tropaeolum, you will probably think no one has them anymore. You have to search for “nasturtium”.

And N. officinale, watercress, is in the plant family Brassicaceae, formerly known as Cruciferae, because the flowers generally have four petals that form a cross. If you insist on using common names, call this one the Mustard family. And call the Tropaeolaceae family the Nasturtium family, because that seems to be what it is commonly called, even though Nasturtium sp. are in the Mustard family. Apparently nasturtium means “nose-tweaker” which is what you do when you smell T. majus flowers because they smell like pepper.

Peppers, by the way, are in yet another plant family. I’m not going to say which one because I think two plant families in one blog post is quite enough. 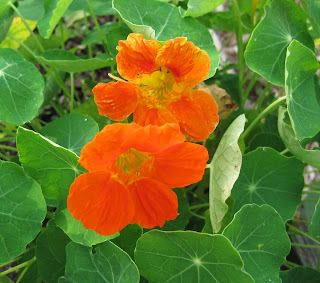 Anyway, for the past two years, I’ve planted “little n” nasturtiums, Tropaeolum majus, around the edges of the raised beds in the vegetable garden. I like how they soften the hard edge of the boards around the beds. And though I don’t eat the flowers, they are edible.

T. majus (“little n” nasturtiums) are easy to grow from seeds. Soak the seeds overnight and sow directly in the garden after your last frost date in the spring. Supposedly they don’t transplant well, so you should sow them where you want them to grow. But I’ve had good success sowing mine inside in peat pots about four weeks before the last frost and planting them intact in the peat pot in the garden.

I planted three varieties this year: ‘Alaska Mix’ with variegated leaves shown below, and ‘Jewel Mix’ pictured above. I also planted ‘Black Velvet’, but I don’t see any “little n” nasturtiums blooming that I would call ‘Black Velvet’. I wonder what happened to them? 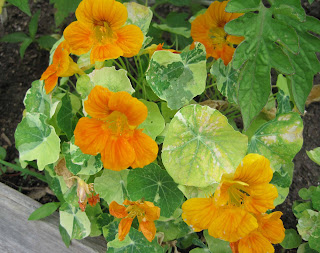 To summarize, because botanical families can be confusing...

And gardeners who care about this kind of stuff are known as Gardener eccentria in the family Geekaceae.