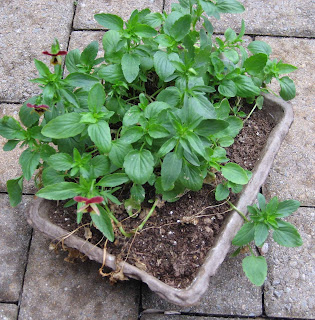 Greetings to all members of the Society for the Preservation and Propagation of Old-Time Gardening Wisdom, Lore, and Superstition (SPPOTGWLS or “the Society”)

I, your self-proclaimed President of the SPPOTGWLS, did my best to keep order and prevent an outright melee from breaking out between the two groups, which I will refer to as the sowers and the non-sowers.

At issue was whether one group of gardeners was superior to the other because they sowed seeds and the others didn’t and vice versa.

I, your President for life, reminded everyone present that the revered gardener and garden writer, Elizabeth Lawrence, often wrote about having someone else who sowed the seeds sent to her from around the country and grew the seedlings on to be good sized plants that Elizabeth could then plant out in her garden. The seed sowers amongst the group were a bit taken aback by this, but seemded to understand that not everyone has a good indoor space for sowing seeds or even a spot in their garden suitable for directly sowing seeds.

I then reminded those who don’t sow seeds that seed sowers are not just vegetable growers who start their tomatoes inside from seed and then fuss over them for weeks on end, with frequent updates to anyone who will listen, until the last frost is past, and it safe to plant their carefully tended plants out in the garden where they will be further nurtured to produce the perfect tomato, the kind that would win first prize in any contest entered. No, that is not the case at all! Seed sowers also sow seeds for perennials, biennials, annuals, trees, really any seeds they can get their hands on.

Both sides were chastised to not fall into the trap of a haughtyculturist who thinks that his/her garden is better than anyone else’s and that their flowers are just a bit brighter and their vegetables just a bit tastier.

The meeting concluded with everyone agreeing that there is room in this great big gardening world for both those who sow and those who don’t sow and both sides will have respect for each other.

I, your President who discloses freely that I happen to enjoy sowing seeds, did make a final motion that if a gardener/Society member has never tried to sow a few seeds, that they try to do so at their next opportunity. There was a second to the motion and voting is now taking place. Members are asked to vote yeah or nay via the comments.

The meeting concluded with a reminder for all to make sure they had registered to win six packets of seeds from Botanical Interests before the deadline of July 31st, 5:00 PM EDT.

Minutes sown by your faithful president,