Are You Having A Good Cucumber Year? 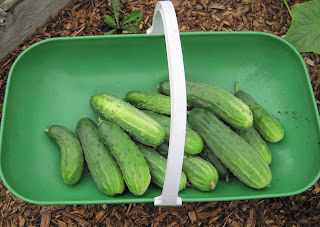 Are you having a good cucumber year?

I’m having a great cucumber year. In fact, it is such a good cucumber year that I can’t keep up with picking all of them, and so there are a bunch of big, overgrown ones in the compost bin. But if you go looking in my compost bin you won’t find them unless you dig down a bit, because I cover them up. I wouldn’t want any of the neighbors to peer over the fence, see those gigantic cucumbers in there and think I’m a lazy gardener who can’t even be bothered to pick her cucumbers until they are too big.

Instead, I’ll just tell everyone on the world wide web that yes, there are overgrown cucumbers in my compost bin because it is a very good cucumber year.

Not every year is a good cucumber year and having a good cucumber year doesn’t necessarily guarantee that it will also be a good squash year, even though both are members of the Cucurbitaceae family, along with pumpkins and cantaloupes and all those other types of squash we grow in the garden.

So what makes a good cucumber year? I know that the last two years, 2007 and 2008, were not good cucumber years. 2007 was a dry year, when we had what we called a moderate drought, which folks in central Texas might call a wet year. But for us it was dry and my cucumbers just never amounted to much. Then last year it seemed like the vine borer and squash bugs were out early in full force. The vines that didn’t wilt and die from insect infestation ended up drying out because after a very wet beginning to the season, it ended up kind of dry.

This year, we’ve gotten rain when we’ve needed it, for the most part, and the bugs haven’t been too bad. That makes it a very good, if not great, cucumber year.

You might ask why after two “not good” cucumber years I would spin the roulette wheel of the garden and grow them again.

You wouldn’t ask if you’ve eaten fresh cucumbers from your own garden.

I have eaten fresh cucumbers from my own garden, so I’ll grow them every year knowing I’ll always get a few and that some years, like this year, I’ll get a lot. I love them. In fact, I love them so much that I really should have a ritual for eating the first one. They are crisp and fresh tasting and not all waxed up like those in the grocery stores. In fact, they taste nothing like those in the grocery store!

My other cucurbits, which is what members of the Cucurbitaceae family are called, are doing okay. My summer squash crop, which consists almost entirely of the round ones I discovered a few years ago, namely ‘Cue Ball’, ‘Eight Ball’, and ‘One Ball’, are doing pretty good. “Pretty good” means that there are nine squash of various sizes on the kitchen table right now and none in the compost bin. But the plants themselves look terrible, probably because the raised beds they are in seem to stay too wet. I almost pulled them out this weekend but didn’t because they are still hanging on and blooming.

I didn’t check the flowers closely to see if there were both male and female flowers on the plants. Most members of Cucurbitaceae family are monoecious, meaning that there are separate male and female flowers on the same plant. You definitely need bees to get the pollen from the male flowers to the pistils of the female flowers. If that doesn’t happen, then the fruit, which botanically speaking is actually a berry called a pepo, won’t form properly. Some serious gourd and pumpkin growers actually don’t want the bees to pollinate their cucurbits but would rather do it themselves with a tiny artist's paint brush, to cross two different plants. I’ve never tried it but I once saw a horticulturist pollinating cucumber flowers that way while I was on a walking tour of the Land Pavilion at Disney World about 20 years ago.

Hand pollinating is a labor intensive and tedious way to get cucumbers. I’d rather take my chances and rely on the bees, the weather, and the absence of squash bugs and vine borers to get my cucumbers. The odds are definitely in my favor that now and again, I’ll have a great cucumber year.

Are you having a good cucumber year?
vegetable gardening