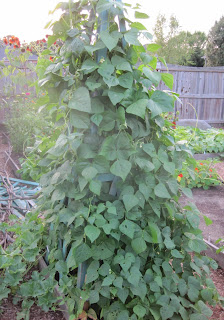 Hey, guess what finally came to my garden this week? I’ll give you a few hints. It’s hot and dry and makes you want to just sit in the shade thinking about gardening. Give up?

Yes, finally, it’s hot like summer and the garden sure looks like it, though it is still producing.

This morning I picked all kinds of peppers, tomatoes, green beans, squash, eggplant, yellow wax beans, and what I think are the last two ears of sweet corn. 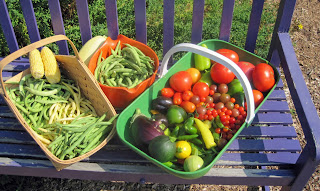 I was kind of surprised by all the beans. I thought for sure the first patch of green beans had stopped producing and I almost yanked them all out last week, but didn’t. Turns out that patch had a lot more “bean” in it. As you can see, it’s not a very pretty patch but I’ll forgive it that for all the beans it gave me. 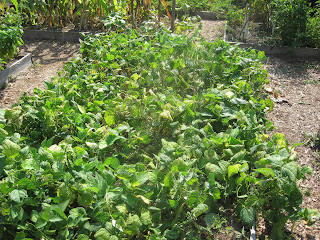 I was also ready to yank out the squash plants, but turns out they weren’t done yet, either. I got three nice little squash from them this morning, picked at about the right size this time.

You’ll notice that “cucumbers” are missing from my harvest this week. I’ll confess I picked several of them, but they were way overgrown so I tossed them in the compost bin. I think not picking them earlier in the week angered the “cucumber gods” because there were no smaller cucumbers to be found in my patch. But I’m taking to heart the lesson from the bean patch and the squash vines and will leave the cucumber vines alone for now. I'm hoping I'll be forgiven and get a few more cucumbers out of those vines before the end of the season.

Speaking of vines, the tower of ‘Blue Lake’ pole beans pictured above finally produced some green beans. Last time I tried pole beans, they didn’t produce at all, but when I got those free seeds when we were in Chicago for Spring Fling, I decided to try them again. I’m sure glad I did as those are good beans; at least the ones I ate raw were good. I’m guessing once I cook them they will be even better.

Well, I need to wrap up this letter. I’ve decided to use some of those tomatoes and peppers to make some salsa. It will have both Jalapeno and Serrano peppers in it which should give it a nice kick. The recipe I have calls for ONE Serrano pepper, but I have dozens, so I’ll put in a little more than that. Don’t worry. I’ll be careful and wear rubber gloves while I’m cutting up the peppers!

Until next week…
Flowers and veggies for all,

P.S. Here’s a picture of my garden this week. I took it around noon which I know is about the worst time to take pictures in a garden. 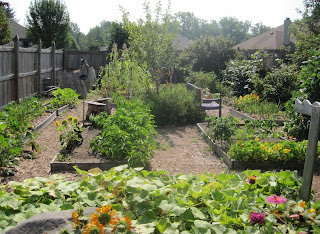 You can see down in the corner there some sunflowers sprawled across the big boulder in the garden. I still haven’t done anything to clean up the sunflowers since the big storm knocked them down nearly two weeks ago. I think I’ll just leave them there because the bees are enjoying them, and this hot weather has made me lazy.

Have a great week!
letters to gardening friends