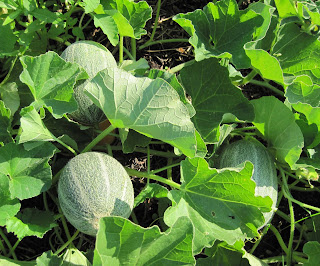 If you follow me on any of the social networking sites, you would have had a hard time missing my picture of today’s harvest, since I tweeted it, plurked it, and posted it on Facebook.

But just in case you did happen to spend today in a cave or offline, I’ll show it here as well. 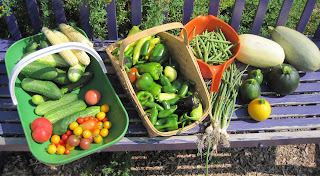 This picture is a good representation of all the summer vegetables in the garden, except for eggplant and cantaloupe. Included are spaghetti squash, summer squash, including some that are overgrown, cucumbers, all kinds of peppers both hot and mild, green beans from the second planting sown on June 15th, onions, sweet corn, and tomatoes, including the first “big” tomato of the season, a variety called ‘Pink Oxheart’.

After I picked all that, I went through the garden weeding and deadheading and generally looking for trouble in the form of insects or disease. I found plenty of weeds, which I dispatched to the compost bin, very few troublesome insects except for a few squash bugs, and not much disease except for some yellowing leaves on the tomatoes, which isn’t unusual for this time of year.

I even ventured into the narrow space between the compost bins and the fence and weeded back there. And that’s not all I did, she says, sounding like a certain kind of television commercial.

I also sowed some seeds for late season crops including three kinds of green beans, two types of radishes, three types of lettuce, two varieties of spinach, and more onions. Here in my zone 5 garden we have about 70 days left until the first killing frost, which is usually around October 10th. That should be plenty of time for the green beans, which depending on the variety need between 45 and 55 days to grow to harvest. It’s also plenty of time for all the rest of the late sown crops except maybe the onions. The packet of those seeds said 75 days. We’ll see. I had the seed so it is worth trying.

Then to finish out my day in the vegetable garden, I also pulled up all the onions left from planting onion sets earlier in the spring. I've washed them off and they are out drying on the patio table. I think I'll probably cut them up and freeze them, along with some of the peppers, to use in cooking this winter.

I have to give credit to both of you for my garden doing so well this summer. I think I’ve done a much better job of keeping up with it this year, knowing I’d be writing this letter every week to provide an update. Some years by this time the garden is lost in a jungle of weeds, but not this year! Thank you!

P.S. In last week’s video of my garden, I showed the tiniest spec of a cantaloupe, even though there are much bigger ones out there. I included a picture of them above.

And here’s a picture of my garden taken just a little bit ago after I finished weeding it. 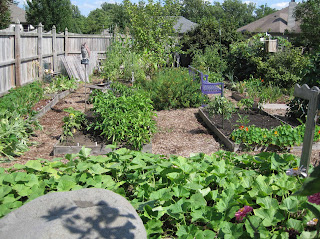 Those places with bare soil are where I sowed the beans and lettuce and all today.