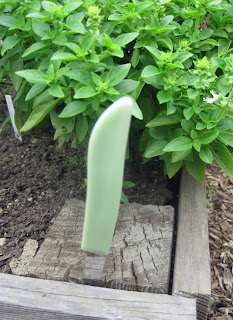 This has been a nice week here at May Dreams Gardens. Out in the garden I harvested the first of the cantaloupe and am up to seven picked so far. I’m eating what I can and sharing some with my neighbor and friends.

Cantaloupe isn’t something I grow every year. In fact, I think it has been 10 years since I last grew any, and if I recall correctly, it wasn’t that good of a crop. But I saw some healthy seedlings for sale at the grocery store one day last May and had one open spot in the garden so I bought them on impulse. I’m glad I did! 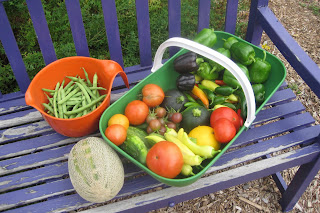 I’ve also been picking a few tomatoes nearly every day, which is why in this harvest picture from this morning you only see four, oops, make that seven or so tomatoes.

The rest of the harvest includes the usual sweet peppers, hot peppers, squash and green beans. I also got a few more cucumbers, which I expected I would once I picked all the overgrown ones last week. I’m still amazed at how well the cucumbers have done, and that I’m still picking them in late August.

This afternoon I worked on some garden clean up - weeding, cultivating and pulling out non-producing plants like the corn and the first planting of green beans. It was a nice day to do it with overcast skies and temperatures in the low 70’s. It was just me and the crickets and cicadas out there, with the occasional slow moving bee going by to half-heartedly warn me if I got too close to the sunflowers.

Outside the garden this week, some other nice things happened, too. Monday morning, I was reading the paper and saw that I was quoted in a little piece on miniature gardens. The author apparently found out about my miniature garden through Twitter. She tweeted asking if anyone knew of gardeners with miniature gardens, someone tweeted back to check Indygardener (that’s me) and so the connection was made.

I also had great fun hosting a give-away of a short-handled Cobrahead weeder. Right before I was to pick a winner, the generous family behind the Cobrahead company contacted me and told me they are going to send a weeder to everyone who entered. Isn’t that the best!

I hope this week is as nice as this past week was.

P.S. The picture above is not one of my schemes to scare rabbits away from the garden, though it might do that as a side benefit. I just wanted to show how I keep a knife out in the garden all the time so if I see a squash to harvest, I have a knife handy to cut it off. Plus, this close up shows how I fix the corners of my raised beds.

P.S.S. Here’s a picture of the garden today. 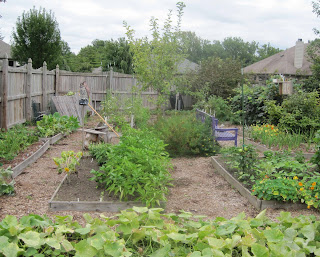 You should notice a little difference from past weeks since I cut down the corn at the far end.

Have a great week!
letters to gardening friends