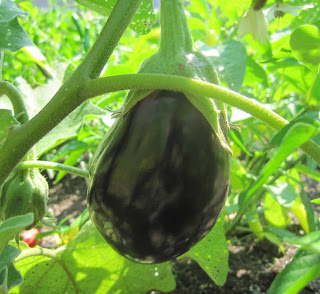 Greetings from my garden where I’m anxiously watching and waiting to harvest this lovely eggplant, one of my favorite, if not absolute favorite, vegetables when it is breaded and fried. And that’s just what I plan to do with this one, bread it and fry it, regardless of the mess I make in my kitchen doing it and the amount of fat it adds to my diet.

It’s just one meal! I’ll combine it with fresh green beans, corn on the cob, sliced tomatoes, maybe some cucumbers, and of course iced tea, for a perfect summer meal from the garden. As I like to say “them’s good eats”! And I picked a bunch of “good eats” yesterday. 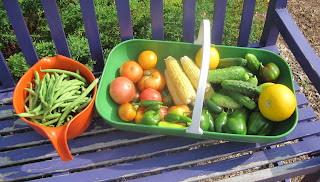 Elsewhere in the garden the cantaloupe are getting bigger and the pole beans are actually producing beans. I’ll soon be eating both of those, along with all the tomatoes I care to eat.

It’s funny about tomatoes. It’s the same every year. I wait all summer for the first big ripe tomato, it finally shows up, and then the flood gates open and now I have enough tomatoes to eat all I want and still share with others. Most years I can expect to have tomatoes from now until frost, but this year, that may not happen. I am watching my tomato plants closely for signs of the late blight that is devastating tomato crops east of here. The Hoosier Gardener reported that they have found late blight a few counties north of here and also a few counties south of here, so I am at risk. Regardless of if I end up with late blight on my tomatoes or not, I’ll throw the tomato vines in the trash at the end of the season and not in the compost bin, just to be on the safe side.

I do like to keep the vegetable garden cleaned up through the season by pulling out plants that are no longer producing. (Some years I’m better about this than others, “do as I say not as I do”.) This helps to control disease and insect infestations and also keeps the garden nice and neat. And where plants are pulled out, if there is time, you can sow more crops, like the green beans, radishes, lettuce, and spinach that I sowed last week. 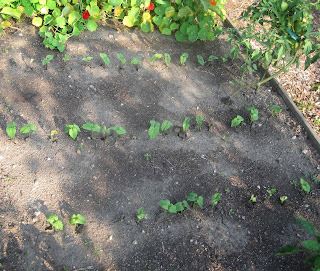 Of all those seeds, the green beans are up, and I see little radish leaves and even smaller lettuce seedlings just breaking through the soil crust. No sign of spinach or onions just yet, but it is still early. That’s all I’ll probably plant for late harvesting.

Now I’m turning my attention back to the flower beds, trying to get those all mulched up before the snow flies, as we say. I’m also scouting the blooms of August for Garden Bloggers’ Bloom Day next Saturday, the 15th already. While I’m out there, I hear the cicadas in the trees and have heard rumors that school starts around here this coming week. Summer is winding down, all too soon!

P.S. Here’s a picture of the garden taken this morning. Can you tell from the picture that it is a hot day, one of our first since late June? 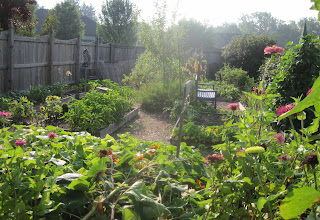 Most of the sunflowers got knocked flat on Tuesday when we were pummeled with three plus inches of rain, accompanied by a lot of wind. I haven’t figured out if I will try to get the sunflowers to stay upright again or if it I should just cut them off now, or just leave them lying on top of the zinnias. The zinnias vote for cutting them off or getting them to stay upright again, as do the butterflies that flutter around the zinnias this time of year. The birds would like me to try to save the sunflowers so they produce seeds. Decisions! 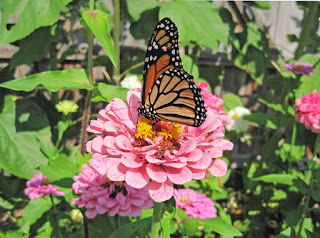 Have a great week...
letters to gardening friends