Plants With A Story 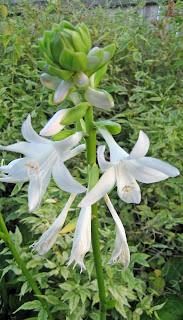 Before this week I had never heard of the Double Japanese Aster, Kalimeris pinnatifida ‘Hortensis.’, also known as the Oxford Orphanage Plant. But now I want it for my garden and my garden won’t be complete without it.

Because I read a new post by Allen Bush on the Human Flower Project blog/website about how the garden designer/writer Elizabeth Lawrence gave him a start of this plant as a passalong plant when he visited her garden in 1982.

I love plants with a story behind them.

Most plants do have a story behind them, if you look for it and ask about it. It might be a family story, like the story of my August lilies, pictured above, now blooming with a sweet scent that hangs in the night air and makes me want to linger in the dark for awhile, wishing that the days were not growing shorter like they are. Or maybe it is someone else’s story, like the story of the Oxford Orphanage Plant, which you are borrowing because now you have that plant in your garden. Then the story forever connects you with other gardeners past and present, who grew that same plant in their gardens.

Then when someone points to it in bloom in my garden and asks “what’s that?” I’ll tell them a story something like this:

“That’s the Oxford Orphanage Plant. I once read about how Elizabeth Lawrence gave a start of these as a passalong plant to Allen Bush, who still grows it today in his garden in Louisville, so I decided to get it as a reminder that passalong plants are one of the greatest gifts a gardener can give to another person because it not only gives them a free plant but also gives that plant a little more meaning and history. Would you like a start of it for your garden? Let me go get my trowel and dig one for you. No, really I insist, because you know that it was the writings of Elizabeth Lawrence and in particular her quote “We can have flowers nearly every month of the year” that gave me the idea for Garden Bloggers’ Bloom Day? Now, give this some morning sun and a bit of afternoon shade and it will do great. Hey, would you also like some August lilies, because as you can see I have quite a few of them. Don’t those smell good? Did I ever tell you the story about how I got them…”
passalong plants