Did You Hear the One About the Toad Lilies? 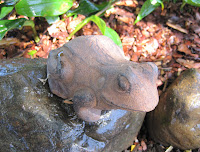 Did you hear the one about the two toad lilies, Tricrytis sp., that hopped into my cart as a cruised very quickly through the big box hardware store?

True story, it happened just yesterday. I was kind of surprised, too, because I was moving fairly quickly up and down the aisles looking for pansies, even though I had just purchased pansies at a local greenhouse and had no plans to buy more. I was just curious to see if they had any and how much they were. Anyway, in spite of the speed at which I was moving, the toad lilies somehow still found my cart.

With one big hop, those two toad lilies set in motion a whole chain of events in my garden, as new plants often do.

First, I had to figure out where to plant them in my back yard, where shade is still a scarce commodity. I managed to find some shade, right where some tall sedum were flopped to the ground. It’s a bit sunnier than I’d like it to be, but just like a dieter who buys a size smaller because it won’t be long before she can wear that next smaller size, I decided to plant the toad lilies there anyway, hoping that by next summer there will be more shade in that spot.

Having picked my spot, I removed the tall sedum by cutting them back and then digging them out. I had already decided that those tall sedum plants were not doing well there because of the shade and should be removed, so having the toad lilies to plant just made me do it sooner rather than later. Yes, I cut them out while they were in full bloom. With bees on them. And I threw them onto the compost pile. I might have broken some kind of rule or maybe several rules by doing that but the two toad lilies were not to be denied their shade!

After I pulled out the tall sedum, I added a few scoops of good compost that I had harvested a few days earlier from my compost tumbler. It’s good to have some compost on hand because you never know, toad lilies might hop into your cart next.

I then proceeded to pull the first toad lily out of its pot and realized that I could probably divide it into three plants, which I proceeded to do using a special knife I bought just for dividing perennials. I love that knife and I love gardener’s math because we get to divide plants to multiply them! It’s sort of a riddle. How does dividing something give you more of it?

Then I planted up my now four toad lilies, watered them in well, and remulched that area. 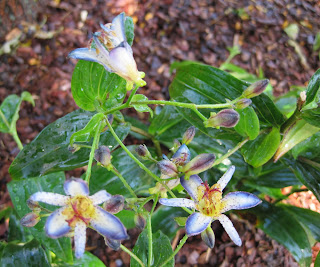 And the one I didn’t divide is Tricyrtis ‘Blue Wonder’. 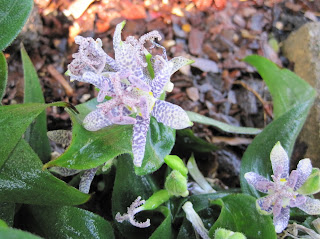 I also made up a slide show* to demonstrate what happened once I got the toad lilies home if you are more of a visual person.

Plus, it might come in handy if any toad lilies hop into your cart this fall!

*I used Picasa to create the slide show and upload it to YouTube. The pictures are a little fuzzier than I'd like, as are the title slides, but it was very easy to do.