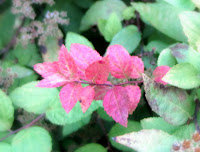 Don’t keep looking over your shoulder to see where Summer went! Fall is here and if you don’t pay attention to it, you are likely to run smack dab into that snow bank called Winter, wondering what happened to Fall.

Fall needs to be paid attention to. It's a season that reveals the character and form of a garden, as leaves fall from the trees and once flowering perennials transform themselves into brown stalks of “winter interest”. It’s the season that pulls back that curtain of greenery we’ve become accustomed to and shows us what is really going on in the garden.

And a lot has been going on in my garden. I noticed that enough leaves have fallen from the crabapple tree by the front walk to reveal a big “stinging insect” nest. I stood there and studied it for a few minutes to see if it was an active nest and noticed a few insects flying around it. 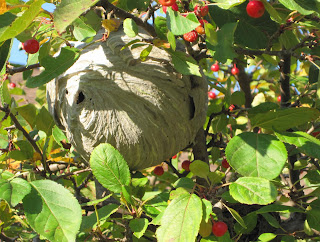 I would guess that it's a bald-faced hornet’s nest. Bald-faced hornets are actually “social wasps” like yellow jackets and paper wasps, but they are only social amongst themselves and don’t appreciate intruders like me getting too close.

The good news is that I wasn’t stung by any of these hornets, or at least haven’t been stung so far. In the past when I’ve been stung by paper wasps and yellow jackets it was when I was trying to get rid of them, so perhaps my good luck was in not finding this nest until the end of the season. Now I’m not even tempted to try any heroic efforts to get rid of the nest, knowing that the frost will likely finish off the hornets in a few weeks.

And while I wait for the first frost, I’ll be out in the garden, looking for more character and form and signs of what really went on here this summer. But I won’t just be standing around looking at hornet’s nests! There's too much to do for that kind of leisure activity, though you want to take a little time for it. Instead, I’ll be busy bringing in a few plants (this weekend), cutting back some perennials, because they aren’t as interesting in winter as some would want you to believe, but leaving other perennials standing because they provide food for the birds. I’ll also be putting away garden furniture, stowing hoses, planting bulbs, pulling weeds – always the weeds – and hopefully mowing the lawn a few more times.

This fall clean up in the garden is a routine I know well enough that I could do it with my eyes closed. But while I'm working in the garden, I’ll keep one eye open for more discoveries, like the hornet’s nest. And always I’ll be dreaming of the coming spring, of May, when the grass is green, the skies are blue, and the garden is all new again here in my garden, May Dreams Gardens.

********
I also found out today that I won 2009 Blotanical awards for Best Writing and Most Educational Garden Blog. Thank you to all who voted for me, and especially thank you to all who visit my blog and leave some of the nicest comments. Those comments are little rewards each and every day. Thank you!
fall insects