On this day of the Autumnal Equinox, which occurs at 5:18 EDT, what is the state of your vegetable garden? Choose one:

(a) I’m still picking a lot of vegetables from it and it will take a hard frost to knock it down.

(b) I’ve given up on it, pulled all the plants out and threw them on the compost pile. It’s just bare ground now.

(c) It’s doing pretty good. I’ve managed to pull out the non-producing plants, but I'm still picking peppers, a few tomatoes, a little bit of squash and a good crop of late sown green beans. Soon I also hope to pick some late lettuce and radishes.

(d) Vegetable garden? Is that what’s hidden under that tangle of morning glories, foxtails, and ragweed out back?

My garden is (c) and here’s the little bit that I picked yesterday in the last light of the last day of summer. 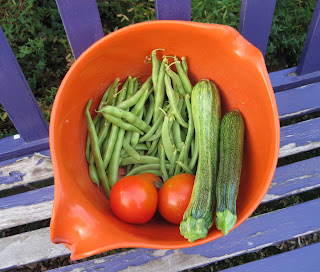 Missing from the harvest are the peppers. I chose to leave them for now, as I have no time to deal with them this week. But there are dozens of all kinds of peppers ready to be picked and I’ll pick them early next week.

The green beans are from a few rows of green beans sown on August 2nd. This is the first time in all my decades of growing vegetables that I’ve sown beans that late. But I had the seed and that space was open in the garden, so all it took was a few minutes to sow the seed and then 51 days of waiting. It was well worth it, as there will be more beans to pick probably right up until the first frost sometime in October.

Whenever I see my rows of green beans, whether earlier in summer or now in early fall, I still think about the rabbits that tormented me for so many years and wonder what happened to them. *Poof.* This year they are just gone. But when the rabbits were here, I could not sow a row of beans and leave it unprotected without them finding it and eating the newly emerged bean plants down to nubs.

I suppose I shouldn’t look for rabbits that clearly aren’t here, but I still wonder. Was it something I did? Something I said? Didn’t do? Or did they just disappear? If it turns out it was something I did, I’d love to know what it was so I can be sure and repeat it each year.

You don’t suppose it was those plastic spoons from last year, do you?

(On the question above, if you picked (a) and you live in zone 5, what is your secret? If you chose (b), please plant again next year, it's bound to be better. If you chose (d), get out there right now and clean up that mess. You are giving us vegetable gardeners a bad reputation. Plus, there could be some vegetables under those weeds, ready to be picked.)

Chookie said…
Heh heh heh... we've just had a thunderstorm dump 15mm on us, and I am looking forward to planting out some tomatoes, cucumbers and beans in the next week or so.

Terry said…
I am a "c". I live in southeast Michigan (zone 5). I am still picking cherry tomatoes, green beans, yellow summer squash, and have 10 butternut squash finishing up ripening. I have spinach that is coming up that I planted a week ago. I did do a lot of cleaning up the last few days as my squashes had gotten quite unruly and it also had a bad case of powdery mildew.
Tue Sep 22, 08:25:00 AM 2009

Darla said…
We have hot peppers and bell peppers in containers on the upper back deck. Our veggie garden has small seedlings in it and our salad garden, well, it's struggling.
Tue Sep 22, 09:25:00 AM 2009

Michelle said…
I have a bit of an unfair advantage like Chookie. I'd say I'm an A+, I'm in zone 9 and my tomato harvest is in full swing. The peppers have barely started and I should be picking those well into November. If the rabbits hadn't chomped my second sowing of beans those would be producing (the third set might give me something in a few weeks). I could go on ...

I think your rabbits hopped a flight to California and moved into my neighbor hood, this is the first time ever that I've had them tormenting my garden.
Tue Sep 22, 10:29:00 AM 2009

Anne At Large said…
I am whatever Zone 5B is and I am definitely a c - still getting moderate amounts of tomatoes and massive amounts of green beans. I've started pulling anything that looks nonproductive though, so things are cleaning up slowly but surely. Sigh.
Tue Sep 22, 10:45:00 AM 2009

Unknown said…
I am none of the above. We are getting snow, ah drats. But I did get some lovely squash before it came in. I haven't even peeked under the row covers and sheets.I am scared to.
Rosey
Tue Sep 22, 11:56:00 AM 2009

Ramble on Rose said…
I go with C, sort of. My pepper plant is exploding with new peppers that I'm afraid will get killed by frost long before they're ripe. But I am hopeful for the late lettuce crop that's growing right now.
Tue Sep 22, 09:26:00 PM 2009