Mint Flower Discoveries: A Guest Post By The Garden Fairies 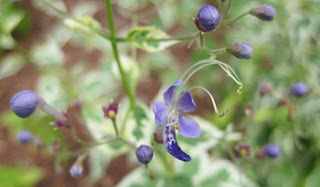 We garden fairies decided to do another guest post because once again Carol has left her laptop running while she’s off doing who knows what right now.

If you see her, please let her know that the Labor Day weekend is the perfect time to finish mulching the flower beds and start pulling out non-producing plants in the vegetable garden. And oh yeah, she should not just mow the lawn this weekend, she should trim and mow.

In the meantime, we garden fairies will be gathering up the tiny blooms of Caryopteris divaricata ‘Snow Fairy’ to use in our own Labor Day weekend celebration.

You almost need a magnifying glass to look at the details, at least Carol does! 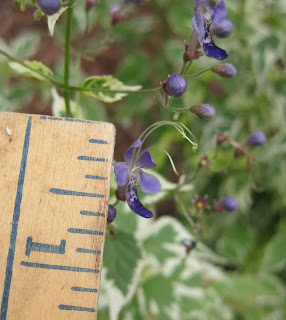 Caryopteris is a member of the Lamiaceae family, also known as the Mint family. At one time it was in the Verbenaceae family but something must have happened, and it got moved to the Mint family. There are rumors on how this came about, but we garden fairies don't traffic in rumors, so we'll just accept the move and move on ourselves.

The Coleus is a well-behaved member of the Mint family and up close its blooms look similar to that of a Caryopteris. 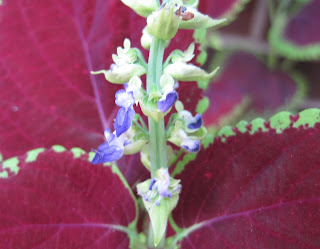 Recently the taxonomists changed the name of Coleus to Solenostemon scutellarioides. We garden fairies have no idea how to pronounce that so we are going to stick with Coleus, thank you very much!

Did you know that most members of the Mint family have square stems? Sure, everyone knows that. But did you know how pretty the flowers are, especially when viewed up close, like these basil flowers? 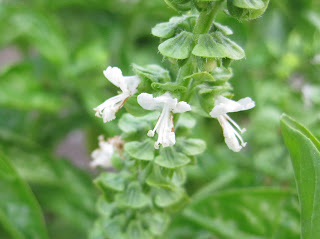 We garden fairies don’t mind the tiny size of the blooms of these members of the Mint family; we actually prefer them. But we do wonder what people would think if the blooms were a lot bigger.

Carol has some history with the Mint family, going back to when she was in high school and planted some spearmint in her parents’ backyard. Funny thing, we hear reports back from the garden fairies there that her spearmint is still growing where she planted it and in several other locations, too. And that's after ten, twenty, well, a lot of years.

But she never really learns, never thinks she can’t control a plant, so now she has chocolate mint planted near some Lamb’s Ear, Stachys byzantina, which is also in the Mint family. 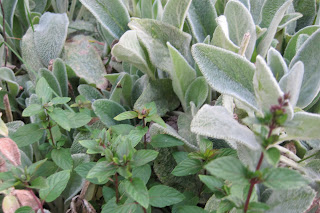 She let’s those two plants fight it out, so to speak. Even after they battle for space, we guarantee that she pulls out a lot of that chocolate mint every year, and she cuts off the flower stalks on the Lamb’s Ear nearly as soon as they form to keep them from getting all floppy. We garden fairies don’t mind, though, as those soft leaves of Lamb’s Ear make for a great place to sleep in the middle of the day, and when she removes the flower stalks it keeps those noisy buzzing bees from coming around and disturbing our sleep. And that chocolate mint is as close as we garden fairies will get to chocolate.

(Except on Easter when Carol has the big egg hunt, but that’s not a safe time to be out and about if you are a garden fairy, what with the Easter bunny running loose and then all those kids hunting under every leaf for chocolate eggs. Shudder to think what might happen if any garden fairy be discovered, but we digress…)

At one time there was another member of the Mint family, Monarda, or bee balm if you prefer, self-sowing and growing throughout her garden, but Carol managed to get rid of those seedlings and switched to a dwarf Monarda that is much better behaved.

But clearly, based on the number of pictures she took of it, her favorite plant in the Mint family is currently Caryopteris divaricata ‘Snow Fairy’. 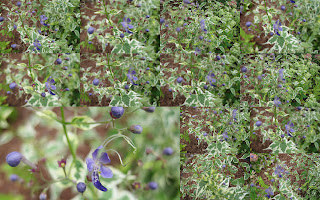