Still Picking Green Beans and Other News From My Garden 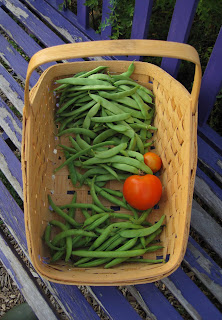 The news from in and out of my garden..

These beans are from my third sowing of green beans this season. Using some seed I had left over, I planted four foot rows of the varieties ‘Provider’ and ‘Bountiful’ on August 2nd, both of which did well for me earlier in the season,and continued to do well for fall picking.

I also planted a row of ‘Roma II’ beans which were recommended for late season planting by Botanical Interests Seeds. It also did very well, and the flat, wide beans will be a nice change of pace after eating the other varieties most of the summer.

I was flattered to have my blog featured by the local garden columnist in The Indianapolis Star.

Jo Ellen Meyers Sharp, our local garden writer and co-author of The Indiana Gardener’s Guide wrote a very nice column about me and my blog and it was in the Saturday paper. As a long time reader, I was thrilled to meet her and talk about gardening and writing about gardening. If you’d like, but only if you really want to, you can read the Indianapolis Star version or go to her blog where she has posted it with pictures.

The upright Fuschia is blooming.

I purchased an upright Fuschia back in May and then almost immediately, it mysteriously didn’t get watered and dried up something terrible. I don’t know how that happens, as I’m usually a fairly attentive gardener.

I cut it back and there was one little green leaf, so I kept watering it all summer and now, it’s blooming! I might bring it inside for the winter and see if I can keep it alive until next spring. It seems to be a survivor, so maybe it will make it.

That reminds me that next weekend, I need to round up all the plants that won’t make it through a frost and decide which ones I want to bring inside for the winter to try to keep until spring. To keep spiders, pillbugs, millipedes, centipedes and other many-legged critters from coming in with them, I’ll repot the plants, even though Fall is generally not a good time to do that. 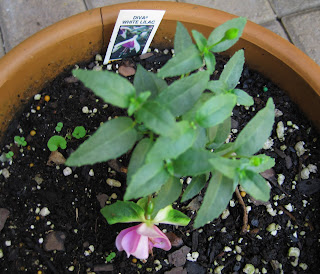 And that’s the news from here in my garden. What’s going on in yours?
Blogging vegetable gardening