When A Gardener Visits The Smoky Mountains 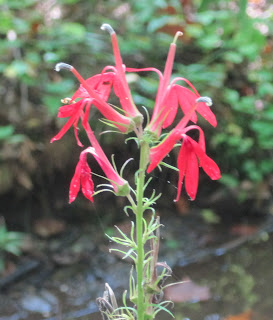 And she wishes she had gotten some seeds for these for fall sowing.

She walks on a trail and sees this paw-paw tree and thinks that her garden needs more shade. 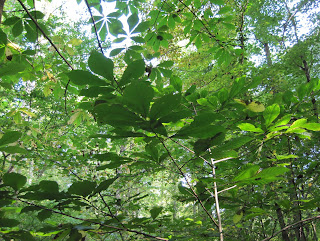 And she thinks about how the paw paw tree, Asimina triloba, is one that will grow in Indiana and that the fruit is supposed to taste like a banana so some people call it by its nickname of "Hoosier banana".

After a short hike, she gets in the car and drives up to Newfound Gap, which is at elevation of 5,046 feet. 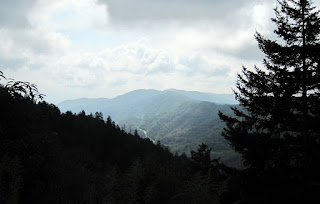 From there she can see North Carolina since she is standing on the state line between it and Tennessee. And she is reminded that she will be in North Carolina next week for another trip.

Leaving Newfound Gap, she gets back in the car to head further up the mountains to Clingman's Dome, the highest point in the park with an elevation of 6,643 feet. It is a mere seven miles from Newfound Gap.

The gardener drives and drives some more and at one point wonders why she is driving downhill to get to a higher elevation. After about ten miles she begins to think that she might have missed a turn somewhere.

Eventually she sees signs for the Mountain Farm Museum and turns in there to see where she really is and what is there. 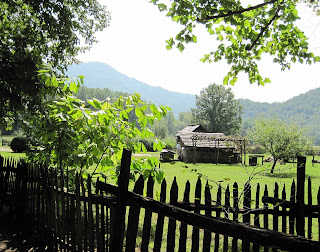 And she finds a picturesque setting with a log cabin and many outbuildings.

Once there she explores the farm a bit and lo and behold, she finds a vegetable garden. 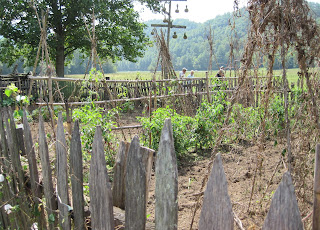 It's a little past its prime but its a garden none-the-less.

Then she goes inside the visitor's center there and talks to the park ranger who shows her on the map where she is and where she was and it turns out that she is a long way from Clingman's Dome. The park ranger says she is not the first person to miss that turn and end up at the farm.

So she gets back in the car and heads back to where she came from and eventually she finds Clingman's Dome. 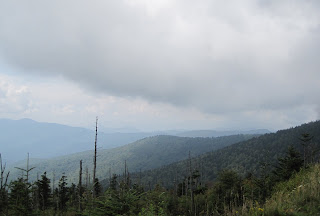 At least she has found the parking for Clingman's Dome. By now it is well-past lunch time so she doesn't take the steep hike all the way to the actual top of Clingmans' Dome.

Instead she admires the wildflowers along the lower part of the walkway, including what she thinks might be the Wild Golden Glow, Rudbeckia laciniata. 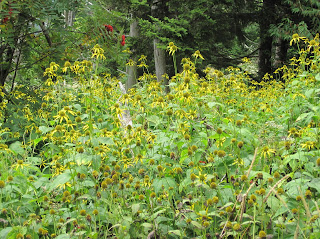 And she decides that the long way from Newfound Gap to Clingman's Dome via the Mountain Farm Museum is really the best way to go when you're a gardener because it means you get to see a garden along the way.

Many thanks to all who joined in for Garden Bloggers' Bloom Day. Fall is arriving all over the northern hemisphere which means for some gardeners, the garden is winding down. For others, it is a breath of cool air and a second gardening season is just beginning.

At the Great Smoky Mountains National Park, the trees are for the most part still green, although here and there you can glimpse a tiny bit of color in a leaf or two. One of the "locals" told me he thought the fall color would be spectacular this year because of all the rain they've had this summer.

I'll miss the big tree show but will always remember... when a gardener visits the park, somehow she'll end up finding one of the few gardens there. It must be some kind of special internal compass that instead of pointing to N, north, it points to G, garden.
when a gardener