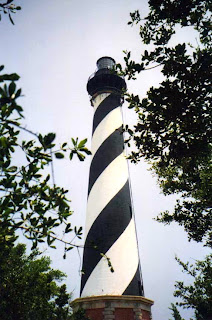 If you are visiting national parks, be sure to plan a trip to the Cape Hatteras National Seashore managed by our National Parks Service. While you are there, don't forget to visit the Cape Hatteras Lighthouse. It's the big tall building.

This lighthouse has stood along the ocean since 1870, lighting the way for ships, preventing them from losing their way in the dark and fog and crashing up against the shore.

And if you were there in July 1999 like I was, you could have also watched the lighthouse withstand a move along the shore.

Yes, they had to carefully move the lighthouse inland to ensure that the sea didn't claim it as its own.

Quite by accident, I ended up visiting the lighthouse on the last day they were moving it, July 9, 1999. 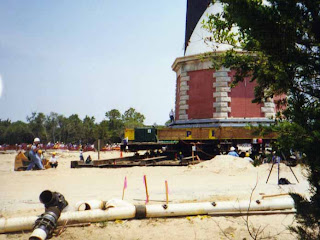 That was quite a sight to see. From what I remember, it was very hot that day, and to get to the lighthouse, we had to walk along a path cut through a thicket. Did I mention it was hot that day? We stayed around long enough to take some pictures and watch the lighthouse move a few feet, then went back down the path through the thicket. It was sure hot that day.

Further up the coast of the Outer Banks, we enjoyed the beach and ocean views. 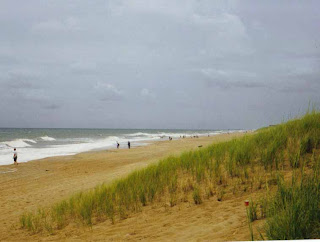 The sea is mesmerizing, and I can understand why some people have to go to the ocean at least once a year to see it, feel it, be recharged by it.

If you visit the national seashore and the Outer Banks, I recommend you also take the time to drive across the sound to Manteo, North Carolina on Roanoke Island to check out...

Yes, it isn't all about seashores and lighthouses and the ocean. It's about gardens! It always is.
In fact, once in this garden, you may forget that you are so near the ocean. It's filled with indigenous plants and planted in an English style with plenty of fountains, statues, and as I recall, a thatched gazebo. 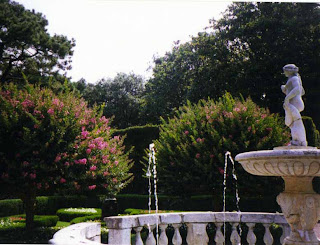 After touring the garden, I also recommend you check out Manteo Booksellers. 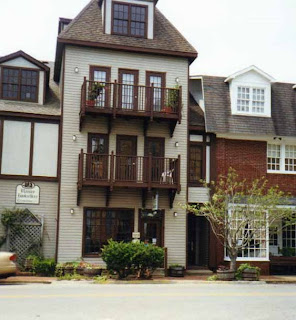 It was in this very bookstore that I bought my first book by the garden designer and writer, Elizabeth Lawrence. And then I actually read the book. And then later I started a garden blog. And then one cold, February day, a quote from Elizabeth Lawrence inspired me to start Garden Bloggers' Bloom Day.

I'm sure glad I visited the Cape Hatteras National Seashore...
And I'm glad that Pam/Digging suggested we all post about our visits to National Parks. It allowed me to fondly remember this visit, where I witnessed the historical moving of a lighthouse, and realize once again how everything is connected, in some way, to gardening...
At least for me...
gardens