Everything I Learned About Touring Gardens, I Learned at Montrose 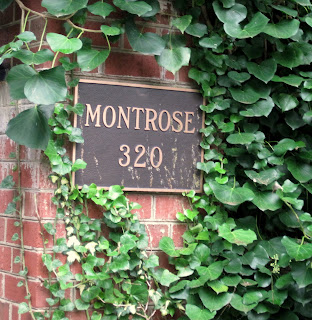 Everything I learned about touring gardens, I learned at Montrose, a garden I visited while attending the Garden Writers Association Symposium last month in Raleigh, North Carolina.

Most of what I knew about Montrose before visiting it was what was included in the symposium’s little guide book:

“Because of her intimately written garden books, Nancy Goodwin is a recognizable name to garden writers, and visiting her breathtaking 61-acre Montrose Garden will feel strangely familiar. Now a Garden Conservancy property, this historic garden was started in the middle of the 19th century by Governor William Alexander Graham and his wife, Susan Washington Graham. Nancy and Crawford Goodwin purchased the property in 1977, creating an achingly gorgeous garden and the former Montrose Nursery (closed in 1993), a mail order nursery specializing in hardy cyclamen and other unusual perennials…”

When we arrived at Montrose on our touring bus, the bus captain announced, “You need to be back on the bus in 50 minutes”, or some short amount of time like that. Less than an hour? That’s not much time to see a 61 acre garden. Even if you run, which is just not done on a garden tour, you won’t see it all. Lesson learned: Read up about the garden before you get there so you know what you want to see the most if time is limited.

When we stepped off the bus, we were greeted by a volunteer tour guide who started to give us a history of the garden. She managed to keep us together as a group for all of five minutes before people started wandering off to do their own exploring. Lesson learned: If you stick with the tour guide and walk with her, at least for awhile, you will learn something about the garden to make up for your lack of research beforehand. You will also be at the front of the group, which makes it possible to take some pictures without having 60 or so other garden writers in them.

Before long, garden writers seemed to be all over the garden, scurrying around like ants trying to find the best vantage point for pictures. Some had tripods and fancy camera lens and were setting up for long views of the garden. Others were focusing in on individual plants. Still others, like me, just held up our cameras and snapped pictures, hoping that when we downloaded them, there might be a few worth sharing. Lesson learned: Watch where you walk while touring a garden so you don’t wander into the path of a photographer trying to take a picture of the garden. Be patient if someone walks in front of you just as you are about to take a picture.

Because we toured the garden early in the morning and it had rained the night before, the grass was still quite dewy and wet, so pretty soon my shoes were wet, too. I didn’t mind it all that much. After all, I’m a gardener so my feet have gotten wet before. Lesson learned: Think about the weather and where you are going and wear shoes that are waterproof if the occasion calls for it. If you are from out of town, pack a second pair of “garden touring shoes” to wear while the first pair are drying out.

After wandering through the garden alone, as alone as you can be with 60 others touring the garden with you, it was nice to hook up again with fellow garden writers for a last look at the garden. I asked Dee from Red Dirt Ramblings to take my picture in the garden, and later Mary Ann, the Idahogardener, sent me a picture via email that she had taken of me in the garden. I liked them both. Lesson learned: I think a gardener looks happiest and most at ease in a garden so don’t be afraid to have your picture taken in the garden to remember the day. You never know when you’ll need a picture of yourself, perhaps for a newspaper article about your garden blog, or maybe for a new newspaper column. (Thanks, Christopher in NC and Mary Ann for sending me those pictures you took of me. They’ve come in handy lately!) And take a picture of your friends in the garden, too.

I enjoyed the 50 or so minutes I had to tour Montrose. I got a good overview of the garden and managed to take quite a few pictures which I put into a slide show if you’d like to see them. Lesson learned: A slide show is a nice way to show a lot of picture, about one per acre in this case, rather than try to pick out a few pictures and upload them onto a blog.

Back on the bus, several of us compared notes on what we had seen, and it seemed we all saw at least one plant or view that the others had not seen. To find out more about Montrose, I recommend you also read The Many Moods of Montrose by Dee at Red Dirt Ramblings. Then read about Colchicum, one particular flower found in this moment of time in this garden, profiled by Kathy from Cold Climate Gardening. Lesson Learned: Everyone sees something different when they visit a garden, through the lens and filters of their own perspective and experience.

Everything I learned about touring gardens, I learned at Montrose.
gardens