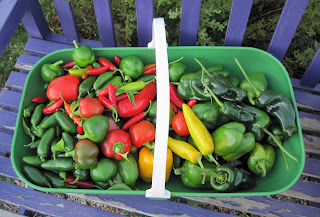 I have all kinds. Hot peppers like Jalapeno, Serrano, Poblano, Hungarian Hot Wax, and Mexi-bell and mild peppers like California Wonder and Big Bertha.

They are red and yellow and green, and all colors in between. And there are quite a few of them, picked by me this evening in anticipation that some night very soon, we will have frost.

The funny thing about these peppers is that I'm not a big fan of raw peppers. I only like them cooked into other dishes, and then I prefer them to be chopped up into tiny pieces. I just don't like to eat big pieces of pepper.

Some people ask me why I grow so many peppers if I don't like to eat them raw. Good question. Let me think on that and get back with you sometime in the January-February timeframe with an answer. By then I'll be maniacally calmly going through seed catalogs picking out the dozen or so varieties of peppers I plan to grow in next year's garden.

In the meantime, would anyone like any peppers?
vegetable garden